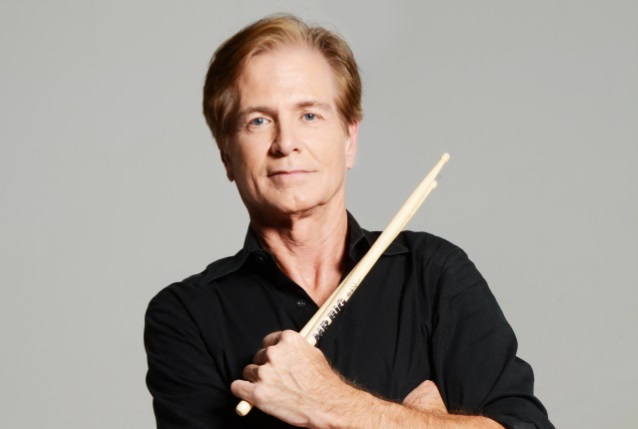 Pat Torpey, drummer and founding member of MR. BIG, passed away Wednesday, February 7 at the age of 64 from complications of Parkinson's disease. His family, bandmates and management request privacy at this very difficult time. Services are pending.

MR. BIG bassist Billy Sheehan said: "Pat Torpey has been my closest friend in music for over 30 years. He passed away yesterday from complications as a result of Parkinson's disease.

"Pat was one of the finest human beings I've ever had the privilege of knowing, and the honor of working with. All of us in MR. BIG had nothing but the highest respect and admiration for him. He is loved by anyone and everyone who ever met him. And surely one of the finest rock drummers the world has ever known.

"Please keep his sweet wife and wonderful son in your prayers."

"I love you, Pat. You made the world a better place. We will miss you. We will never forget you. Rest in peace, my brother."

Former MR. BIG guitarist Richie Kotzen stated: "So saddened to learn of the passing of my friend and former bandmate Pat Torpey. We spent years touring the world, making music, family holiday gatherings, and even remodeled a house together. Pat's sense of humor, wit, and smile lit up any room the moment he walked in.

"I am grateful and thankful to have had you as an incredibly important friend and influence in my life. You will be missed beyond words. With love and tears... Rest in peace, my friend."

MR. BIG vocalist Eric Martin called Torpey "the strongest guy I know" in an interview with Total Rock last December. "He's such a strong personality, very smart, great rock n' roll drummer, and [Parkinson's disease] has taken apart his nervous system," he said. "Once in a while, he'll play a few songs with us. Our last tour, he played half the songs, and Matt [Starr] played the other half. On [the most recent European] tour, Matt plays the full drum kit, and then we call it a cocktail kit, but it's a percussive kit, and he's to the left of Matt and plays all the percussion and sings all the stuff. Spiritually, [Pat is] our driving force behind the band. Every time he goes, 'Oh, man, I don't know if I can do this,' I don't know about the rest of the guys, [but] if he bows out, I'm going to bow out with him."

In a 2017 interview with Rock Rebel magazine, Sheehan spoke about Torpey's battle with Parkinson's disease. He said: "Pat, unfortunately, ran into a bad situation, and as a band, we wanted to make sure that he knew that we were with him 100 percent. It's a tough thing for everybody, but Pat has demonstrated incredible courage and strength. He's inspiring to so many people all over the world. I get e-mails from people every day who maybe don't have the same affliction, but have something similar and Pat inspires them to get out of bed and get going and push back a little bit more. I think that's a wonderful thing in itself. The American military, the Navy Seals and their motto is 'No Man Left Behind.' So for the beginning of this, we adopted their motto to a rock band and [it was] 'No Man Left Behind'. A lot of bands are out there now and they don't have all the original members. Sad, sometimes you can't. People pass on and situations, but we really want it to be Paul, Eric, myself and Pat. Matt is incredible at helping out. I have to mention how awesome he is and how wonderful a job he's done to do Pat's parts the way they should be done. Really wonderful."

Asked in a 2011 interview with OnlineDrummer.com what influenced him to pick up a pair of sticks and start drumming, Torpey said: "I was about 7 or 8 years old, and my family used to go to this local picnic event with a live polka band. I was able to sit behind them and look down on the drummer, right on the top of him, and so from that vantage point I could see what he was doing, and I thought, 'Wow, that looks like fun!' That was my first memory of when I can remember wanting to play the drums. I went to my mother and said, 'I wanna play the drums,' and she gave me that look that parents give you, you know the 'Oh, yeah, sure you do… you're 7 years old.' So from there I kind of held on to that dream. I'd fashioned some drum sticks from a couple of sticks out of the yard. I carved them and drew my name on them with a magic marker, you know, the kind of thing an aspiring kid would do."

MR. BIG, formed in 1988, produced numerous hit songs that ranged across a wide array of rock genres — be it ballads, heavy metal, or blues rock. Their hits included "Alive And Kicking", "Just Take My Heart" and the chart-topping ballad "To Be With You".

Note: An earlier version of this article incorrectly gave Pat Torpey's age as 58.

It's with great sorrow that our beloved Pat has passed away due to complications of Parkinson's disease on 2/7, aged 58. Family and friends request privacy on this sad time and our hearts and condolences go with them. We'll miss you Pat Torpey, the man, the legend, for always 💔 pic.twitter.com/0XDW1jidtH

So saddened to learn of the passing of my friend and former band mate Pat Torpey. We spent… https://t.co/Os6Fx9y4LU

So shocked and saddened to hear of #PatTorpey’s passing...my heart goes out to his family and all of his bandmates and friends who I know are all completely devastated over this...my deepest condolences @BillyonBass, @PaulGilbertRock@Richie_Kotzen Eric Martin @mrbigmusic 😢 pic.twitter.com/DTYti7urqq

Just heard the news of @mrbigmusic Pat Torpey passing. So very sad to hear and such an amazing person and drummer. Our thoughts and prayers go out to the family, band and fans worldwide. We love you Pat and Godspeed dear friend🙏

So sad to hear of the passing of Pat Torpey. A lovely man. My prayers to all close to him. Pat Torpey, Mr. Big Drummer, Dies https://t.co/8vBqRJzmRP@UltClassicRock

I am very sad to hear an old friend Pat Torpey pass away today. He was always so healthy . Until Parkinson... https://t.co/LIb9dpaldB

Why is it always the really really nice guys?
I was honored to have know him and have played with him and called him a friend...
My condolences to Mr Big and all the family...

Sad to hear of the passing of my friend Pat Torpey. Pat and I were in a jam band together back… https://t.co/rR9Ij2h1WO

Pat Torpey ... an incredible drummer and a great guy...Im honored to have had the pleasure to work with him..he will be sadly missed.....my sincere respect and sympathy to his family .. friends.
.. and band mates....RIP....

So sad we’ve lost #PatTorpey. I saw Pat play many times with Mr. Big over the years and also… https://t.co/acFlSTd7jj

RIP Pat Torpey. You were a huge part of Mr Big. A phenomenal drummer and such a trooper fighting through the brutal disease of Parkinson’s the way you did. My deepest condolences to your family, friends and band mates.

It is with great sadness that I remember our friend Pat Torpey who passed away recently. Pat was… https://t.co/2LRUtw6BNt

R.I.P. Pat Torpey... an amazing musician and an even better man. @mrbigmusic

So so sad to hear about the passing of the Great n Mighty ,Pat Torpey @mrbigmusic Such a Nice guy and What a great drummer!!!
My Deepest Sympathies to his Family,Friends and All of the Big Camp@EricMartinBand@BillyonBass@PaulGilbertRock@Richie_Kotzen

RIP Pat Torpey. A very big inspiration to me and so many other drummers. While battling Parkinson’s Disease he... https://t.co/6QZ45juAXz

Rest In Peace Pat Torpey :(
He will be greatly missed. pic.twitter.com/pvVURi5U3N

Just heard the news of Pat Torpey’s passing.. I was blessed to know him and tour with he and Mr Big in 1992.
A solid Gentleman and one amazing drummer/vocalist!
Rest In Peace Brother...

the drumming world and the music world morns with the passing of @mrbigmusic#PatTorpey .To know him, was to know a sweetheart of a human and one of the most talented drummers of our generation. my heart goes out to his family on this sad sad day. pic.twitter.com/M2XHCW5yYa

So sad to learn the tragic news that Pat Torpey has passed. Rest in peace, brother.

I am very sorry to hear about the passing of Mr. Big's Pat Torpey. I have spent countless hours listening to the songs you were on. Thank you.

So very sad to hear about the passing of Pat Torpey!! Rest in peace... https://t.co/A5HbtPhSN2