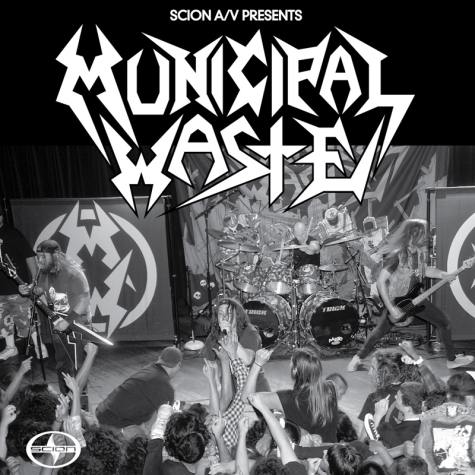 Virginia's speed metal punks MUNICIPAL WASTE will release an exclusive seven-inch single which will include the non-radio-friendly version of the song "Repossession" from the band's new album, "The Fatal Feast", plus two re-recorded tracks from deep in the band's discography. The tracks are available now as digital downloads at this location. The release will be limited to 1,700 records in five different colors.

Commented MUNICIPAL WASTE guitarist Ryan Waste: "The tracks 'Garbage Stomp' and 'Poser Disposer' are from 2002 and were previously recorded for our second release ever: a split 12-inch EP with CRUCIAL UNIT which is now out of print. We finally re-recorded them with the band. 'Garbage Stomp' is the intro — which we're bringing back on tour."

Scion A/V is providing the seven-inch single in limited blue vinyl as part of Nuclear Blast's super-limited-edition pre-order bundle for "The Fatal Feast" LP (to be released April 10),which features a pop-up gatefold. Only 500 copies are available worldwide. Pre-order it here.