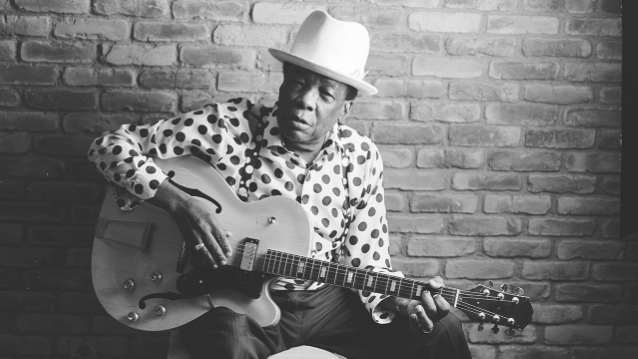 BMG has announced it has acquired the music interests of iconic American blues singer-songwriter and guitarist John Lee Hooker from his estate. The agreement includes his entire publishing catalog ("Boom Boom", "One Bourbon, One Scotch, One Beer", "Boogie Chillen", among others),co-acquired with BMG's longstanding partner Fujipacific Music, his entire recorded and performance royalty income, as well as a selection of Hooker's recorded catalog spanning "Alone, Vol. 1" (1980) through "Black Night Is Falling" (2020),acquired solely by BMG.

In what is a complex musical legacy some rights will still remain with third parties, but BMG will now take a lead role in promoting Hooker's outstanding catalog.

The acquisition is the latest in a string of recent deals completed by BMG to acquire rights from musicians, including Mick Fleetwood, Tina Turner, MÖTLEY CRÜE and ZZ TOP.

Jeff Jampol, CEO, JAM, Inc., said: "As the longtime managers of the John Lee Hooker estate, JAM, Inc. was happy to help the estate and BMG conclude this transaction. We are very pleased that an artist-first company like BMG will be the stewards of this great legacy moving forward, and we are grateful to remain in a consulting and management role of the John Lee Hooker legacy, in partnership with BMG, moving forward. This is a rare triple-win for everyone: the Hooker family, BMG, and for the millions of John Lee Hooker fans all across the world. We can't wait to see — and be a part of — what's coming next."

Known to music fans around the world as the "King of the Boogie," John Lee Hooker endures as one of the true superstars of the blues genre: the ultimate beholder of cool.

His work is widely recognized for its impact on modern music — his simple, yet deeply effective songs transcend borders and languages around the globe. Each decade of Hooker's long career brought a new generation of fans and fresh opportunities for the ever-evolving artist.

Among his first recordings was "Boogie Chillen" (1948) which became a Number One hit, selling over a million copies. This success was soon followed by a string of hits, including "I'm In The Mood", "Crawling Kingsnake" (most famously covered by THE DOORS),and "Hobo Blues". Over the next 15 years, Hooker maintained a prolific recording schedule, releasing over 100 songs, including the most significant song of his career "Boom Boom".

One of the most recognizable and memorable blues standards, "Boom Boom" was initially a chart success in both the U.S. and U.K., and over the years has been extensively featured in both films and commercials, while also being covered by numerous artists. The song has been included in the Rock And Roll Hall Of Fame's list of "The Songs That Shaped Rock And Roll", was inducted into the Blues Foundation Hall Of Fame's "Classics Of Blues Recording", and in 2016, his iconic recording of the 1962 Vee-Jay Records single was inducted into the Grammy Hall Of Fame.

When the young bohemian artists of the 1960s "discovered" Hooker, among other notable blues originators, he found his career taking on a new direction. Across the Atlantic, emerging British bands were idolizing Hooker's work. Artists like THE ROLLING STONES, LED ZEPPELIN, THE ANIMALS and THE YARDBIRDS introduced Hooker's sound to new and eager audiences, whose admiration and influence helped build Hooker up to superstar status.

Throughout the late 1970s and 1980s, Hooker toured the U.S. and Europe steadily. His reputation in the mainstream ballooned in the ensuing years, especially following a cameo in the 1980 film "The Blues Brothers", wherein he's seen busking in the street with a rendition of "Boom Boom".

As Hooker entered his 70s, he suddenly found himself in the most successful era of his career — reinvented yet again at the age of 72, he released the biggest album of his career, "The Healer" (1989). The Grammy Award-winning album paired contemporary artists (Bonnie Raitt, Carlos Santana, LOS LOBOS and George Thorogood, among others) with Hooker on some of his most famous tracks. "The Healer" was released to critical acclaim and sold over one million copies.

By the 1990s, not only was the decade a time of celebration and recognition for the legendary artist, but it was also a highly productive era. He released five studio albums over the next few years, including "Mr. Lucky" (1991),which once again teamed up Hooker with an array of artists; "Boom Boom" (1992),which aimed to introduce new fans to his classic material; the Grammy Award-winning "Chill Out" (1995); and a collaboration with Van Morrison, "Don't Look Back" (1997),which also garnered two Grammy Awards. Throughout the decade, Hooker's great body of work and contributions to modern music were being recognized not only by his peers but also by a younger generation, energized as ever, touring and recording up until his passing in 2001.

An inductee into the Blues Hall Of Fame, Hooker was a recipient of a National Heritage Fellowship awarded by the National Endowment for the Arts, the U.S. government's highest honor in the folk and traditional arts. In 1991, Hooker was inducted into the Rock And Roll Hall Of Fame, while in 1997, he was presented with a star on the Hollywood Walk Of Fame. A five-time Grammy Award winner, in 2000, shortly before his death, Hooker was recognized with a Grammy Lifetime Achievement Award.