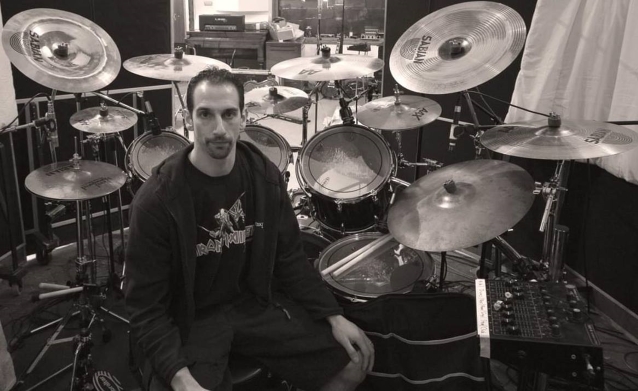 U.K. doom metal veterans MY DYING BRIDE have parted ways with drummer Shaun Steels "due to unresolvable drumming issues." He has been replaced by Jeff Singer (pictured; KILL2THIS, PARADISE LOST),who has already laid down his drum tracks for MY DYING BRIDE's upcoming studio album.

Says the band: "Jeff has been a light in a dark room. He breathlessly and seamlessly plays with the new music and intuitively seems to know what we're asking for. He has removed a lot of unnecessary pressure from the band in an already testing time. At last something good happens."

This past September, MY DYING BRIDE vocalist Aaron Stainthorpe revealed that his daughter's cancer diagnosis led to the cancelation of the band's four festival appearances in late 2017. She has since beaten what Aaron has called "one of the cruellest of God's bitter and loveless creations."

For 28 years, MY DYING BRIDE from West Yorkshire has been the voice of the hopeless and broken, combining haunting sounds with crushing misery and melancholy. With their signature sound, they've shaped the doom metal scene like barely any other act and integrated both soft violin melodies and violent death metal growls into their music, while always staying strictly loyal to themselves. And since the early '90s, the band's masterminds and founding members Andrew Craighan and Aaron Stainthorpe forged beautiful grief into 12 studio albums with songs of epic length.

My Dying Bride have recently had to part ways with Shaun Steels due to...