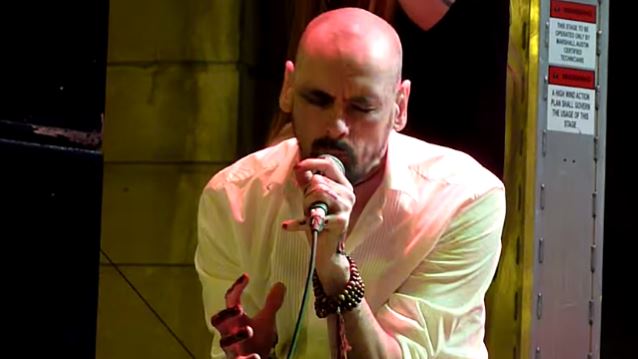 In a new Peaceville podcast series, former Peaceville Records employee Dave Pybus, responsible for the layout and design of many classic titles (and perhaps more widely known for his time with ANATHEMA and CRADLE OF FILTH),discusses his days at the company at the start of the 1990s, and talks with some of the bands and artists from back then, reflecting on the ways of the industry and the changes since.

In the first episode of his "Peaceville Days" podcast, Pybus talks with Aaron Stainthorpe of MY DYING BRIDE about the early visions of the band, plus techniques of constructing artwork in the early '90s, along with some of the tribulations involved in the pre-Photoshop era. Also joining the trip down memory lane is a conversation with artist Dave McKean, himself responsible for some of the early iconic MY DYING BRIDE artwork.

You can listen to the podcast below.

MY DYING BRIDE last year parted ways with guitarist Hamish Glencross due to "irreconcilable differences" and was rejoined by Calvin Robertshaw.

MY DYING BRIDE released an EP, "The Manuscript", in May 2013 via Peaceville Records on CD and vinyl.

"The Manuscript" contained four new and exclusive songs. It was recorded and mixed at Futureworks Studios in Manchester, U.K. with the band's longtime producer, Rob "Mags" Magoolagan.

MY DYING BRIDE's latest full-length album, "A Map Of All Our Failures", was released on October 15, 2012 in Europe and October 16, 2012 in the U.S. via Peaceville Records on CD, double vinyl and special-edition CD+DVD.