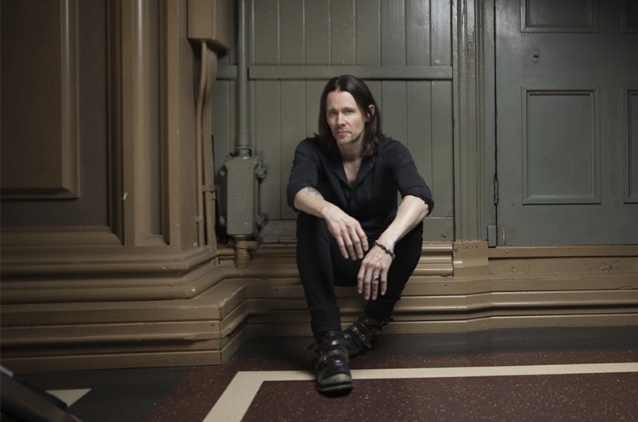 In a brand new interview with 90.3 WMSC FM, Myles Kennedy confirmed that, prior to the inclusion of the late Scott Weiland, he had been asked to throw his hat into the ring for the VELVET REVOLVER vocalist position, but that didn't work out.

"Well, they'd reached out and asked if I'd be interested in auditioning," Myles said. "So, long story short, I respectfully declined, but I was beyond honored that they thought of me. For whatever reason, it didn't feel like it would work at that point. That was the right move, 'cause I think that when Scott Weiland got in the mix, I was, like, 'Oh, yeah. That's the guy.' I really love that band, actually; I thought those records were really cool. I thought he had just kind of a dangerous vibe that suited what they were doing."

According to Myles, that wasn't the only time he had been approached to try out for the VELVET REVOLVER singer gig. "It's interesting: there were two times," he said. "So, the first time, Slash reached out. He doesn't even remember this, but in 2002 — I think it was the summer or fall of 2002, before Weiland was even in the mix — I remember my manager had called me at the time and he said, 'You might be getting a call from somebody in this camp, because they're looking for singers.' But I was blown away when I picked up the phone and Slash was on the other end of the line. And then, about seven years later, after they had parted ways with Scott and ALTER BRIDGE was on hiatus, they reached out. So, yeah, there were two times. But I never auditioned — it was just something that had been talked about and never came to fruition."

Slash told The Pulse Of Radio a while back that the rest of VELVET REVOLVER ultimately harbored no ill will toward Weiland. "No, you can't really get pissed off at Scott because, you know, we knew what we were getting into going into it and, you know, he managed to do pretty well for a while there," he said. "But then he turned around and it was aggravating and frustrating and all those negatives, but at the same time, you can't sit there and be surprised. And it was a pretty good run with him, for a minute."

Earlier this year, Slash told Rolling Stone about Weiland's December 2015 death: "As crazed as that whole period was, I was still shocked to hear about Scott. But yeah, VELVET REVOLVER was no fun. I have nothing positive to say about that experience except that we did write some cool stuff."

Myles and Slash ended up working together when the guitarist again hit up Kennedy, this time to sing on a couple tunes on Slash's 2010 solo debut. Kennedy later took a more central role — under the SLASH FEATURING MYLES KENNEDY AND THE CONSPIRATORS banner — on 2012's "Apocalyptic Love", 2014's "World On Fire" and the recently released "Living The Dream".