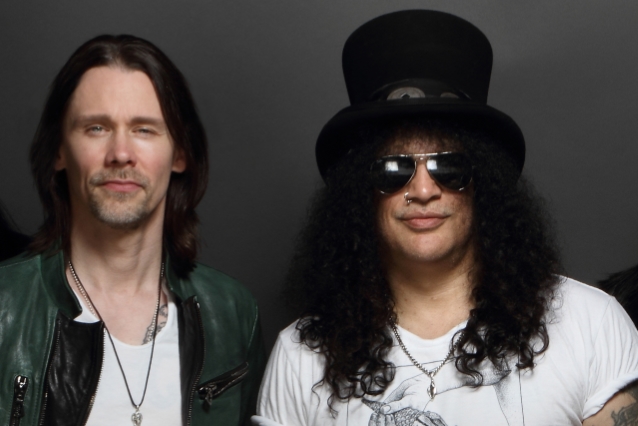 MYLES KENNEDY Says SLASH Is 'Very Easy To Work With'

In a brand new interview with Anne Erickson of Audio Ink Radio, Myles Kennedy spoke about the camaraderie and respect between him and GUNS N' ROSES guitarist Slash. Kennedy sang lead vocals on a pair of songs that appeared on Slash's eponymous solo debut album in 2010 before taking a more central role — under the SLASH FEATURING MYLES KENNEDY AND THE CONSPIRATORS banner — on 2012's "Apocalyptic Love", 2014's "World On Fire" and 2018's "Living The Dream".

Asked if Slash is as intimidating to work with as he appears to be, Myles said: "He's really cool. I mean, he's very easy to work with. There's no intimidating whatsoever, actually, as far as writing with him, because of the fact that he's not precious with his ideas. That's one of the downfalls with a lot of creative people, is you tend to get kind of protective and territorial, and you let your ego come into the fold. And with him, what I learned early on in the process was that he was open to whatever. So, having that ability and knowing that he's gonna do what's best for the song is very liberating. He's a very cool guy. He's just a really mellow cat who loves to play music more than anything in the world. So, it's fun."

Slash told The Pulse Of Radio a while back that his partnership with Kennedy has been easy from the start. "We work really well together," he said. "I never really thought about how that's progressing. It's real natural. So it's like any kind of sort of close relationship, where I think we established it really, really early on and now we're just sort of doing our thing, you know. Yeah, I don't know what else to say — it's just a really cool kind of synergy that we've got."

"Living The Dream" was released in September 2018 via Slash's own label Snakepit Records, in partnership with Roadrunner Records. The disc is Slash's fourth solo album, and third with Slash and his bandmates Kennedy (vocals),Brent Fitz (drums),Todd Kerns (bass and vocals) and Frank Sidoris (guitar and vocals). The artwork was created by renowned visual artist Ron English.

The "Living The Dream" sessions saw the band reunite with producer Michael "Elvis" Baskette, who also helmed "World On Fire".