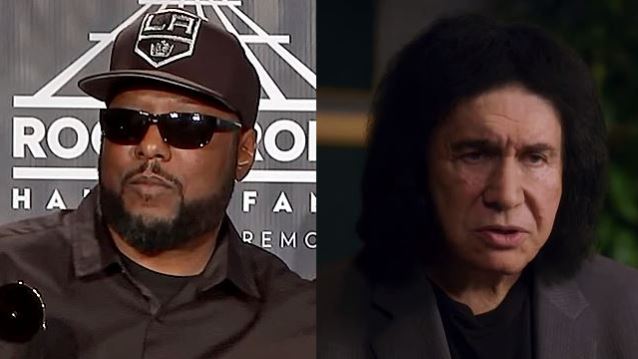 MC Ren of N.W.A. has slammed Gene Simmons for the negative comments the KISS bassist/vocalist made about the Rock And Roll Hall Of Fame inducting rap artists. "That dude is real arrogant," the rapper told Rolling Stone. "It's like, how he's looking at us, how he know that people before him in rock and roll don't look at him like that? How he know THE BEATLES or Muddy Waters, if he was still around, don't look at him as a gimmick? Who is he to say anything if he's wearing makeup and heels and sticking out his tongue every 10 seconds of his show? Come on, man, that's a gimmick."

"He's probably so salty because hip-hop groups got in before he did, like RUN-DMC, BEASTIE BOYS, GRANDMASTER FLASH and the FURIOUS FIVE and PUBLIC ENEMY. I think he was mad they got in before he did, but that's what it is. And, Im'ma tell you this right now, you can quote this: 'Fuck Tha Police' is way more rock and roll than 'I want to rock and roll all night and party every day.' Come on, man."

In a recent interview with Rolling Stone, Simmons predicted that rap would soon die out, and he'll be the first one to dance on its grave.

"Rap will die. Next year, ten years from now, at some point, and then something else will come along," he told the magazine. "And all that is good and healthy. I am looking forward to the death of rap. I'm looking forward to music coming back to lyrics and melody, instead of just talking. A song, as far as I'm concerned, is by definition lyric and melody, or just melody."