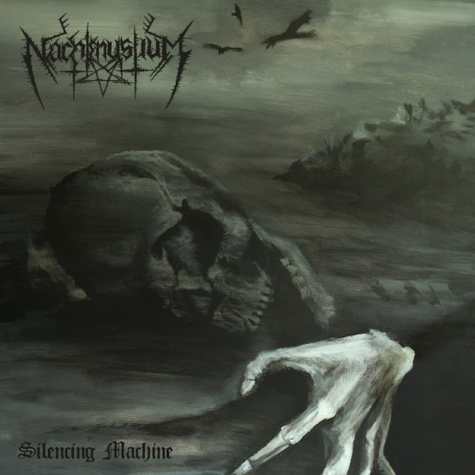 Chicago-based extremists NACHTMYSTIUM will release their sixth album, "Silencing Machine", on July 31 via Century Media Records. The CD, which is described by frontman/lead guitarist Blake Judd as "a fuckin' black metal record," was recorded at Engine Studios with the band's own synths/electronics specialist Sanford Parker (YOB, PELICAN) handling production duties.

To give fans a behind-the-scenes look at the making of "Silencing Machine", the band recently launched the first of five in-studio webisodes featuring exclusive footage and interviews with the band. Filmed and edited by Justin Baron, who recently did the YAKUZA documentary, part 5 can be seen below.

Commented Judd: "Thinking back to when we signed to Century Media and decided to do those metal records, I wanted to do two really weird records and then go back to what we've been doing. This was in 2007 and it just so happened that my thought process stayed with me for many years. I missed the live energy of the more aggressive stuff. The last two records weren't really that aggressive and they were definitely a step away from that raw black metal foundation we started with.

"I wanted to bring it back for some personal reasons: I like it live a lot and I think it has some great energy. And I really didn't know where to go next with that whole adventuring process we did on those last two records. It's just not what we wanted to do for this record; we wanted to capture what we sound like live in the studio. On this record, there's never more going on in a song than we're capable of recreating live, which is a really big thing for us, because there's so much on those last two records that we can't play without having a number of extra musicians onstage at any given time.

"Overall, my interest in metal has come back, now that I've been away from Battle Kommand and working in record stores for a number of years. I've finally been able to get back into metal as a fan. I got really burned out on it. But now I pay more attention to the bands I like from the genre and I found some new stuff. We're also touring with a lot of metal bands and I've seen some really cool stuff. I think that's rubbed off on us as well."

"I Wait In Hell" audio stream: