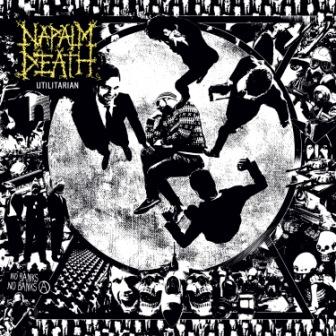 "Analysis Paralysis", the new video from British/American grindcore pioneers NAPALM DEATH, can be seen below. The clip was shot and edited by the band's own guitarist, Mitch Harris, who has his own unique underground style and manages perfectly to capture the energy, hate and sheer power of NAPALM DEATH's songs.

"Analysis Paralysis" comes off NAPALM DEATH's 14th studio album (excluding the cover album "Leaders Not Followers"),"Utilitarian", which was released on February 27 in Europe and February 28 in North America via the band's longtime partner, Century Media Records. The cover artwork (see below) perfectly fits the album's theme and was created by the Danish artist Frode Sylthe, who is also responsible for THE HAUNTED's "rEVOLVEr" artwork.

NAPALM DEATH frontman Mark "Barney" Greenway explains the album title and concept: "After some deliberation, we have decided on 'Utilitarian' as the album title. We generally try to avoid generic titles, and this seemed to have a lot of scope to it. I won't explain the full meaning of utilitarianism here because it's an ethical theory, and as ethical theories go, the depth and debate around it is quite heavy at times. It has a certain 'morality' aspect to it and that isn't something that drives me, so I also certainly have issues with it."

"So, rather than just nail that straight to the mast, of course we wanted to put our own spin on it by suggesting that those (i.e. the utilitarian in us, perhaps) who try to challenge everything, or fight against conventions, well, we go through periods of real self-doubt where we wonder if we're really making a difference. I suppose the conclusion is that, for the sake of all our freedoms, you should never stop, as even the feeling of resistance is at least a signal to those who would like to entirely control and dominate us — meaning everything from our instinctive behavior to our human entitlement to walk the earth unprovoked.

"Regarding the album overall, the final creases should be ironed out fairly soon, and immediately after that, we thought it would be good to top it off with a few U.K. dates. We've been playing one new song ('Quarantined') out on a tour of Canada and it's been well received, so we hope to perhaps throw in another one for now. Either way, we'll be bouncing off the walls again near you very soon."

Fan-filmed video footage of NAPALM DEATH performing "Analysis Paralysis" on January 27 at the Vortex club in Siegen, Germany can be seen below.