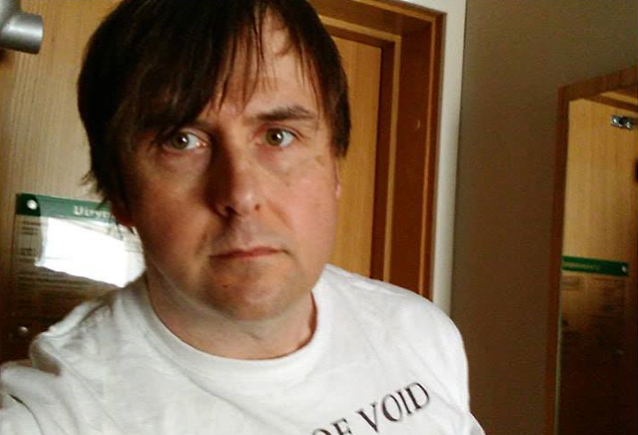 NAPALM DEATH Frontman On Veganism: 'The Whole Planet Is Gonna Have To Adapt To A More Plant-Based Diet'

During a chat with EMP at this month's Bloodstock Open Air festival, NAPALM DEATH frontman Mark "Barney" Greenway spoke about his adoption of a vegan diet. He said (as transcribed by BLABBERMOUTH.NET): "I've been a vegetarian since I was 14 years old. So 38 years I'm a vegetarian. Vegan for just over 10 years now. To be honest, I was pretty much always vegan. There was just a couple of things in my diet, but then I was just, like, 'Why do I need to eat these things?' So I cut it out.

"Obviously, principally, I did it for humane purposes, but I'm also into that health side of it as well," he continued. "The humane side is always my start point, but I think the health side of it, for me, is also really important. So I incorporate that into physical exercise and stuff. I have no reason to ever revert at all."

Barney went on to suggest that more and more people are replacing meat and other animal-based foods with plant-based options as a way to lean into a healthier, more humane and sustainable way of eating.

"Everybody finds their own way," he said. "But the bigger point to it is that I think now people have more of an intergral understanding of basically preserving the environment — the very environment that we live in. Intensive farming is not sustainable; it can't continue. So I know the whole planet is gonna have to adapt to a more plant-based diet."

The vegan diet means eliminating all animal products from your diet — as in meat, fish, poultry, dairy and eggs.

Plant-based meat sales grew by 45 percent and plant-based milk sales were up 20 percent from 2019.

This past spring, NAPALM DEATH signed a new deal with Century Media Records, extending the long-running co-operation between the parties once more.

NAPALM DEATH released its latest studio album, "Throes Of Joy In The Jaws Of Defeatism", in September 2020 via Century Media Records. The follow-up to 2015's "Apex Predator - Easy Meat" was again recorded with longtime producer Russ Russell and features artwork by Frode Sylthe.