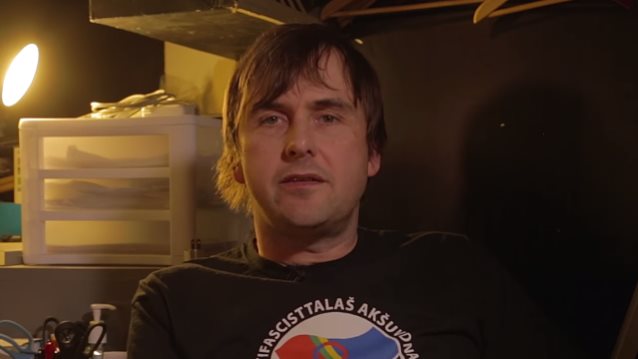 In September 2014, KISS bassist/vocalist Gene Simmons made headlines when he declared in an Esquire article that rock was "finally dead." In the months and years that followed, many a musician has weighed in on the topic in a variety of interviews, with some digging a little deeper into Simmons's full comments and others just glossing over the headline.

In a brand new interview with Australia's Blood Sweat And Metal, NAPALM DEATH frontman Mark "Barney" Greenway offered his opinion on the topic, saying that rock "wasn't dead thirty years ago" and "it's not dead now."

"I'm not a huge authority on it, but I know in Australia — let's make it specific to where you are — I know the underground scene in Australia, for many different styles of music — rock music, hard-edged music — is fantastic," he continued. "I know that some of the Australian punk scene around the Melbourne area, going back twenty, thirty years, was so uncontrolled and so spontaneous, so kind of quote-unquote dangerous at times. But it just makes it invigorating."

Greenway went on to say: "Gene Simmons, arguably — I mean, he's not here to answer for himself, obviously — but I would argue that he doesn't see underneath a certain level so he doesn't get that true spectrum of everything. He's just maybe saying rock is dead, because the people that he knows that are on the level that they are, or thereabouts, with KISS, perhaps aren't doing as well as they used to. Well, okay, fine. But there's a lot more to it than that."

"Again, I can't speak for Gene Simmons — he's not here to speak for himself. Maybe he does have a knowledge of music, but that's what I suspect — [that] he's only talking on a certain level. And, of course, underneath that, there's an obviously thriving musical scene that's very fertile."

Barney added: "To go back to the buzz phrase, if you like, rock isn't dead — it wasn't dead thirty years ago, it's not dead now.

"Just put it on the metal side of things, if we're gonna focus on that. I mean, IRON MAIDEN are, sort of, perhaps in the twilight of their years; BLACK SABBATH have gone now, effectively, whether they come back and do a few gigs here and there; METALLICA, okay, still going strong. And, again, I'm talking as not the biggest enthusiast of heavy metal. Who else is there? I don't know. And then when you look at all those truly big bands, well, they're not gonna be around forever. So I think his point maybe is, who's the really truly huge bands that are coming through? Maybe there won't be any. Maybe it'll stay at a certain level now and that'll be it. I mean, who knows? Who can say?"

NAPALM DEATH recently entered Parlour Studios in Kettering, Northamptonshire, England to begin recording its new album for an early 2018 release. Helming the sessions once again is producer Russ Russell, who has previously worked with THE HAUNTED and DIMMU BORGIR, among others.