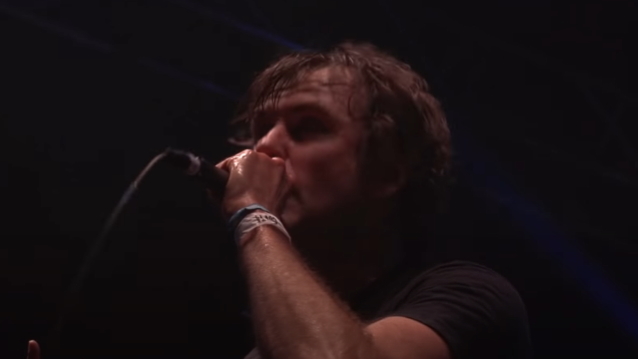 NAPALM DEATH Members Got COVID-19 At End Of Fall 2021 U.S. Tour: 'That Was Rough, To Say The Least,' Says BARNEY GREENWAY

During an appearance on the latest episode of "The MetalSucks Podcast", vocalist Mark "Barney" Greenway of British grindcore pioneers NAPALM DEATH spoke about what it was like for him and his bandmates to complete their first pandemic-era U.S. tour last fall as the support act for GWAR. He said (as transcribed by BLABBERMOUTH.NET): "The tour itself was great, but you had to be kind of a little bit vigilant to try as best you could to not be mixing with too many people who you didn't know — for obvious reasons at this point in time. Which is completely alien to my way of doing things usually, but, of course, we completely understood why that needed to be the case. Unfortunately, it didn't stop all of us from getting COVID right at the end of the tour, so that was rough [laughs], to say the least."

Greenway clarified that he and other members of the NAPALM DEATH touring party tested positive for COVID-19 "right at the end of the tour after we finished, actually. [That was] good in some ways but not in others," he said. "I mean, I had to stay over for 10 days in the States when I didn't want to. And it was a big old financial hit for the band on top of everything else. The COVID tests that we had to do while in the States, the cost was eye-watering. We'd already got that, and then we had to pay for accommodation [at the end of the tour], and that was the financial hit. But on the other side of things, we got travel insurance, so we made sure that everybody got travel insurance, just in case they became hospitalized. Nobody did in the end, but we were covered for the hospitalization but not for the accommodation, so we still had to pay for that."

NAPALM DEATH will return to the U.S. this spring as part of "The North American Siege 2022" tour with ARCH ENEMY and BEHEMOTH. Set to kick off in April, the trek will also feature heavy gothic rockers UNTO OTHERS as special guests.

"It's really strange, man, because America is actually the easiest place to tour right now," Barney told "The MetalSucks Podcast". "We had a European tour that just got canceled, or postponed till next year, because of the varying COVID restrictions at this point from different countries. Logistically, it was just not doable right now. So the States is actually the easiest place so far to be able to tour. And obviously this tour [with BEHEMOTH and ARCH ENEMY] came up unexpectedly, then we may as well — we may as well do it.

"If you know anything about us as a band, you know it would really be to the nth degree that something wasn't possible for us to pull it, especially at this short notice," Greenway said, referencing the postponed European tour. "I was gutted, to be honest. One of the bands on the tour was DOOM, and the drummer is one of my oldest friends, and I really wanted to do it — I was really looking forward to it — and it just all fell apart at very short notice. We hung on in there as long as we could but it just became clear that, because of the different regulations in each European country, it was just too prohibitive. And there is a chance in Europe, I think — people will correct me if I'm wrong — but the restrictions might even change for some countries, so it could get more severe while we're out there. And if we can't get into a country because of that, well, for the logistics of the tour and stuff, that's gonna be really difficult. So we kind of took the unfortunate but necessary decision at this point to just not chance it. It would be too much of a risk for us for the tour."

As previously reported, NAPALM DEATH will release a new mini-album, "Resentment Is Always Seismic - A Final Throw Of Throes", on February 11 via Century Media Records.

"Resentment Is Always Seismic - A Final Throw Of Throes" is a partner recording to NAPALM DEATH's latest album, "Throes Of Joy In The Jaws Of Defeatism", concluding matters through vital, tumultuous grindcore and shockwave ambience.