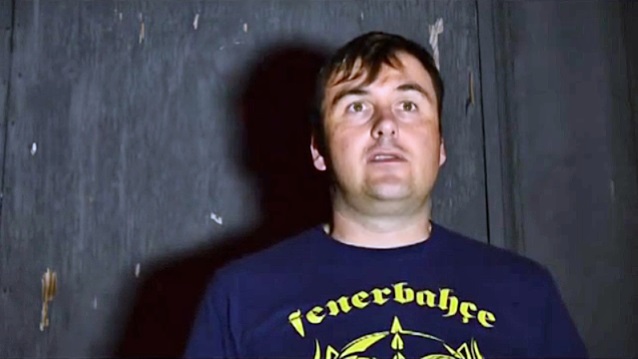 Metal Wani's Owais "Vitek" Nabi and Sairaj Kamath recently conducted an interview with vocalist Mark "Barney" Greenway of British grindcore pioneers NAPALM DEATH. You can now listen to the chat in the YouTube clip below. A couple of excerpts follow (transcribed by BLABBERMOUTH.NET).

Greenway: "Well, it's not reinventing the wheel, let's put it like that. It would be inaccurate of me to say so. But it's just a couple of steps forward, basically. There are many different influences within NAPALM, but I guess there's two quite distinctive styles, just on a listening level, and that's… you've got the very traditional, fast and chaotic, almost off-the-rails kind of NAPALM approach, and then you've got a real kind of queasy, ambient, quite depressing [sound], actually, in a some ways. And we've been sort of doing the two in tandem now for many, many albums, but I think as time goes on, we're tending to mix the styles a little more… not better, necessarily, but in more inventive ways, and I think that's where we are now. That's about the best description I can give, because, obviously, you'll understand that, for us, the album's still really fresh, so I haven't fully digested it, even though I made the fucking thing, along with the other guys. But I have still yet to fully digest it."

On whether "Apex Predator - Easy Meat" is another conceptual effort:

Greenway: "Well, the funny thing is that every time I do an album — because I've done so many albums that could be considered conceptual — I always say to Shane [Embury], the bass player, 'You know what, Shane? I'm not gonna make this next one a concept album; it's gonna be completely loose.' And then every time it ends up being some kind of conceptual thread roaming through. But anyway, with all that said, the trigger event, really, for this album is something that is quite pertinent to the general Indian subcontinent or whatever and beyond. But the catalyst was the Rana Plaza distaster in Bangladesh a couple of years ago [when more than 1,000 people lost their lives when a nine-story factory building collapsed suddenly in Dhaka]. That was what really set me on the path of where we were going with this album. As soon as that thing in Bangladesh happened, I was, like, 'I have to do an exposé of this, to some degree, with the next album.'

"The reason the Bangladesh disaster struck a chord in me so much, aside from the actual nature of the event, is the fact that, first of all… As disasters go, you tend to find there's quite a lot of rolling coverage over a number of days, but with the Rana Plaza one, I felt like it was headline news for a day, and it very quickly dissipated. It kind of gave me the impression a little bit that life was somehow considered cheap in certain areas in certain parts of the world and under certain circumstances, and that really gave me an unpleasant feeling… So I took that whole thing, really, and then just widened it out a little bit, so we look at slave labor worldwide on the new album. Because, actually, there's more slaves now than, statistically, apparently, than there ever was in the history of recorded data. So think to that? When we're supposed to be a more humane world, or moving towards that. And then it widened out into other areas, so it ended up with quite a wide scope, really."

"Apex Predator - Easy Meat" will be released on January 27, 2015 (one day earlier internationally) via Century Media Records. The CD's striking artwork, which can be seen below, was created by Danish designer Frode Sylthe (Friktion.com),who has previously worked on the band's "Utilitarian" album as well as with such other acts as AT THE GATES, TOTALT JÄVLA MÖRKER, THE HAUNTED and BURST.