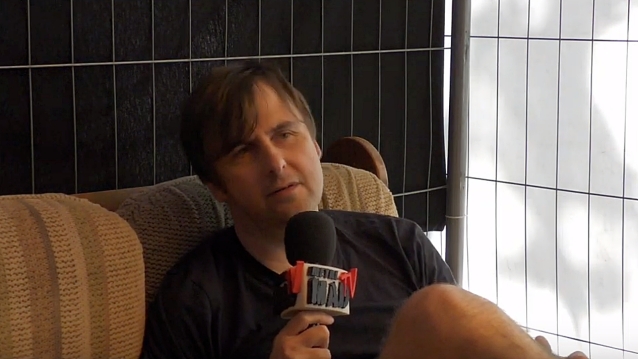 Prior to NAPALM DEATH's appearance at the recent Motorcultor festival in Saint-Nolff, France, vocalist Mark "Barney" Greenway spoke with Metal Mad TV. The full conversation can be seen below. A few excerpts follow (as transcribed by BLABBERMOUTH.NET).

On what he's been listening to lately:

Barney: "Because we've making a NAPALM DEATH album, [THE] YOUNG GODS. We listened to a lot of them whilst making the NAPALM album, because there are certain things that I wanted to achieve, and they're a huge influence on NAPALM DEATH. Huge."

On the group's new album:

Barney: "[We're] very close to finishing it. We're trying to get it [done] for February/March next year. I can't give you the name yet, but the theme is 'the other.' One good example of people being treated as the other is this whole thing about immigrants. Not everybody, but there is a certain percentage of the population that looks at them as something different — like, not human, almost. I wanted to challenge that way of thinking. Not only is it the other immigrants or whatever you want to call people that migrate. There's other things as well — other people who are treated as 'the other.' I would suggest simply, generally, that it's not necessary to treat people differently."

On not branching out with side projects like his bandmate, bassist Shane Embury:

On the band's 2018 compilation "Coded Smears And More Uncommon Slurs":

Barney: "Have you seen how many songs we've put on records? We couldn't put everything on there. No way. We write enough songs for extra tracks, which you always need for Europe, Japan, et cetera, but also enough to do split 7-inches with whoever — any band that comes along that we want to do something with, so we always write all these extra tracks. Not everything gets used, so some of it is on the compilation album."

Barney: "Things are quite deceptive. NAPALM's schedule, in between [tour legs], there's a lot of space, because just like anybody else, we have personal lives. We do have time to do stuff. It's just that we tend to do a lot in a small space of time. We do a lot, but a few years ago, we kind of thought about it a little bit more so we could space things out. Otherwise, it would be really heavy."

Barney: "I think the whole thing's really fucking stupid. The European Union is not perfect in many respects. The kind of European Union that I want to see is the European Union that exists entirely to keep the peace between people and also to help people when they sort of go down. The financial side of the European Union — the way the finances are used — really is problematic, but as a social entity, I think it can be a good thing, but it needs to be reformed. But I guess that's beside the point — the whole thing about the U.K. becoming isolated, forget about Brexit. A lot of it is to do with the U.K. isolating itself, which is fucking stupid. Brexit, to me, is a little bit irrelevant. It's more the feeling of, 'We want to be an island nation, and everybody else is kind of second.' It goes back to imperialist mindset — old, colonial thinking, which is gone, and it doesn't need to come back."

On the environment and climate change:

Barney: "I've been concerned about it for fucking decades. The thing that bothers me is that people understand it more because of the information that's been given, I still don't think enough people grasp how fucking serious it is. This is not something that you can go, 'Oh, maybe I'll do something soon. Maybe I won't.' It's got to be now, because it's going to be too late in not too long of time... Obviously, with a band, it's hard not to fly, but I want to cut down on my flying very significantly. I drive a hybrid, but I don't use my car when I don't need to. I really do try, but it's many things... Anxiety is a good thing, but you need to mix that with clear vision. It doesn't serve to just be afraid. You've to be forward-thinking as well."

The follow-up to 2015's "Apex Predator - Easy Meat", NAPALM DEATH's new album will feature an appearance by guitarist Mitch Harris, who has been taking a leave of absence from the band since late 2014 to focus on his family life.

NAPALM DEATH will team up with MUNICIPAL WASTE for a co-headlining U.S. tour. The 17-date trek will kick off in Dallas on October 3 and visit New York, Chicago and Denver before ending on October 23 in Los Angeles. Opening the night are New York hardcore legends SICK OF IT ALL and hardcore punk/thrash metal band TAKE OFFENSE.