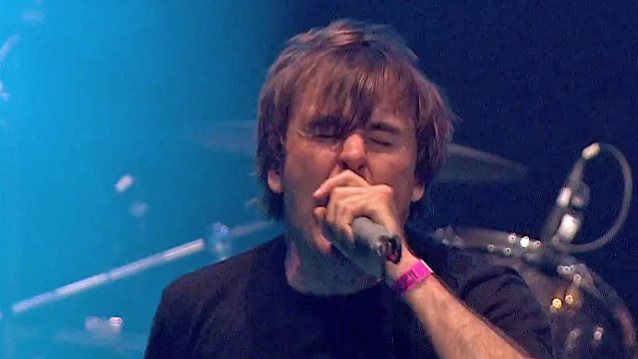 NAPALM DEATH frontman Mark "Barney" Greenway was interviewed on a recent episode of "The Metal Podcast". You can now listen to the chat using the audio player below. A couple of excerpts follow (transcribed by BLABBERMOUTH.NET).

On whether NAPALM DEATH has a need to begin work on the follow-up to 2015's "Apex Predator - Easy Meat" album:

Barney: "The need is when we feel it. We're not a band that's dictated to by what the record company needs. In as much as we listen to them, and we have a very good relationship with our record label, it's not like they're sitting there with spreadsheets going, 'Oh, you need to do this now.' We have to feel it, and Century Media have always been great with us in that respect. They don't come knocking on the door going, 'You best do an album. Contractually, you need to be doing this album now. Here's the stipulated time frame in the contract.' They've never done that; they've always left us to our own devices. 'Cause they know we know, if you know what I mean. The thing with 'Apex' is it went so well, and the reception went so well, that we just keep being asked to go on that album. We just keep getting invited different places, and very often the same place several times, as in the U.S. A few months ago, me and Shane [Embury, bass] were really talking about it and we decided, 'Yeah, let's start soon.' So just to give people an update. What's basically happened so far is Shane's gone in and he's laid down his preliminary music that he had, which is a lot of stuff — some of which we might not use; a lot of it we will. So that's where we are — we're literally no further than that at this point. Much like 'Apex' was, it will be several sessions of short, quickfire periods of time, and then, once that's all done, it will come out. The idea being to get a different feel going back to a studio at different periods, because all sorts of stuff, like the different time of year, the seasons, the ambient temperature can always have an effect on things. And we like that — we like that non-uniform intricacies to the sound. I think it's good, rather than just going in for three or four weeks and setting the desk and playing the songs. Well, we can do a lot more than that."

On the status of NAPALM DEATH guitarist Mitch Harris, who has been taking a leave of absence from the band since late 2014 to focus on his family life:

Barney: "Here's the thing: Mitch has never been out of the band. He's on hiatus; I'm sure people have noticed. But he hasn't been out of the band; he was never out of the band. And I constantly kept telling people about this. Because people are, like, 'Oh, he must be out of the band by now.' And what I can assure you is he's not — he's definitely not. What we're trying to do right now is we're trying to figure out how we're gonna do the album with him. And, obviously, I don't wanna go into too many details, 'cause it's kind of private between us and him. But, yeah, that's what we're trying to do right now — basically, figure that out with him. Whether he'll tour with the band again, I don't know; I must be honest. He stopped touring with us for various reasons, which were very, very, very legitimate reasons. But it's got to the point now where his life has moved on, and I'm not so sure whether the amount of time that we spend away now would suit him, and I totally respect that. But we'll see. Never say never. I'd love it if he came back, but I'm not sure whether it's gonna happen. So we'll see. But like I said, we're working on his involvement with the next album. I don't know how that's gonna pan out yet, but we're trying to figure it out."

On whether NAPALM DEATH would ever add another permanent member on guitar:

Barney: "If it doesn't work out with Mitch at all, worst-case scenario, then I don't know. I have to be honest. The thing with us is we're very insular. We are very outgoing people, we're very easygoing, but we're also very protective, and I'll easily admit that. There was a certain chemistry between what was the five — with Jesse [Pintado, guitar], before Jesse passed away — which continued with the four, which was me, Mitch, Danny [Herrera, drums] and Shane. There was a certain chemistry, I think, that I'm not sure we could totally get that with another member. It's not impossible. Me and Shane have talked about it quite a lot, and we haven't really come up with anybody that we think could be up to that mark. And so I don't know. Whether it just stays the three of us and somebody like John Cooke, who's been playing guitar [with us on the road]. He's brilliant; in a live setting, he has worked wonders, I think. So when you've got somebody like that — fantastic. But on the writing side of things, we're still not sure about that. So I don't know — I just don't know how things are gonna pan out with that. We'll have to see. Like I say, I'd really love it for Mitch to be involved. But certainly on the live front, I'm just not sure that's gonna happen."

On whether he has been in contact with Mitch in recent months:

Barney: "I spoke to him the other day. I haven't spoken to him too much, to be honest. Shane has spoken to him more than I have. But he seems to be doing good, and I'm glad for him. 'Cause there was a time when he had a lot on his plate, man, and some things happened in his personal life that… He's not the first person in the world to go through these things, but they're never good when they do come."

On whether he gets the feeling Mitch would want to write and tour with the band if "life things" didn't get in the way:

Barney: "I would say, realistically, he would love to write. That's without question. Whether he would like to tour, that's debatable at best. So, yeah. That's all I can say, really. Some things have to stay private, because they are literal things between us and Mitch — nothing sinister. It's just whether we can figure it out or not."