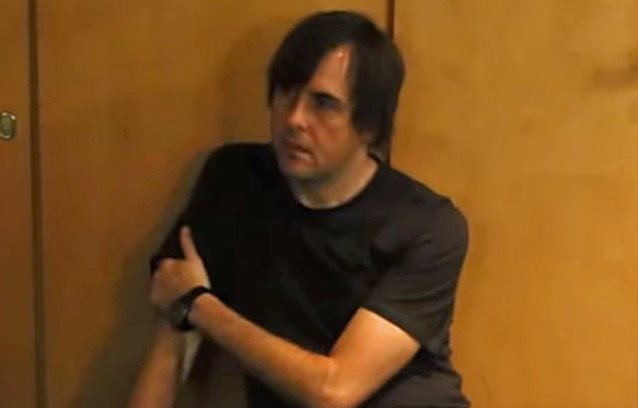 RSPTV conducted an interview with vocalist Mark "Barney" Greenway of British grindcore pioneers NAPALM DEATH on November 8 in Gothenburg, Sweden. You can now watch the chat below. A couple of excerpts follow (transcribed by BLABBERMOUTH.NET).

On how the process of making NAPALM DEATH's latest album, "Apex Predator - Easy Meat", was different from previous releases:

Barney: "The process of making it is always the same. We're quite a spontaneous band. We try not to be too rigid in writing albums. We do what we feel is the best at the time, stylistically. We're not rigid; we don't have a checklist of things that a particular album should be. It tends to be quite organic in the way it comes out."

On how NAPALM DEATH's lineup changes over the years have affected the band's sound:

Barney: Well, there hasn't been any changes, member-wise, for quite some time — since 2000-something because of Jesse [Pintado, guitar] leaving. And we don't have Mitch [Harris, guitar] with us right now; at the present time, we've got a fill-in member. So it kind of changes, but not really. And it hasn't affected us. It hasn't affected the way that we do things. And musically and lyrically, the band has always been… It's actually not that different now from what it was twenty-something years ago, in terms of still having the aggression at the root of the music. And the lyrics are along the same lines as they've always been."

On the high and low points of NAPALM DEATH's career so far:

"I think we've done some fairly historic stuff. Like, we were the first band, independently, from this kind of scene to play Soviet Union… Russia. Nobody had done that before us from the extreme music scene, and doing it independently, hadn't been done. So that was quite historic. Going to South Africa with the ANC [African National Congress], with Nelson Mandela's party, a first after apartheid; that was quite historic. There's a few other things. You can never hope to be in situations like that, you know, so, of course, it's quite important, certainly to me. So there have been many high points. Yeah, I mean, low points… In the grand scheme of things, probably not huge things. But being in the band, in particular, can bring its difficulties. You know, you're living with same four people. Five people living together day to day can be tricky sometimes. But, you know, again, not the worst things in the world."

NAPALM DEATH and the MELVINS will join forces for the "Savage Imperial Death March Tour", a six-week spring trek that is scheduled to kick off on March 26, 2016 at The Marquee in Phoenix, Arizona.

NAPALM DEATH is continuing to promote its 15th studio album release, "Apex Predator - Easy Meat", which you can order various formats of as well as previous NAPALM DEATH releases from CM Distro.