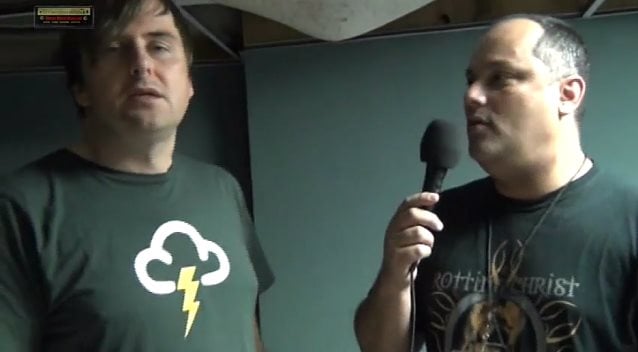 NAPALM DEATH's MARK 'BARNEY' GRENWAY: 'We Have This Feeling Of Just No Boundaries'

MetalPR.com conducted an interview with vocalist Mark "Barney" Greenway of British grindcore pioneers NAPALM DEATH on May 17 in San Juan, Puerto Rico. You can now watch the chat below. A couple of excerpts follow (transcribed by BLABBERMOUTH.NET).

On NAPALM DEATH continuing to release spit CDs with other bands and appear on various compilations:

Greenway: "It's just to keep ourselves having variety within us. Because I think there's nothing worse than seeing a band who just do the same thing all the time. And I don't mean stylistically, I mean the things they do — release an album every two years, tour, and that's it; there's nothing different about it. You've gotta remember, NAPALM and its roots came from the punk scene, and all of us, to some degree, also. So we have this feeling of just no boundaries, almost, to a point. Sure, you know, we've got our style and what we like to do, and we do deviate from that, but it's essentially, the core is kind of the same. We feel that there's many different ways of doing things. One of the things that always pissed me off, being in a band, for the years that the really major corporate entities owned the music industry, so they kind of set the rules, or so they tried to make people believe they'd set the rules. And that's another reason: knowing you can do things on your own without having to answer to somebody else. It's quite liberating."

On working with various record labels over the years:

Greenway: "You've gotta remember, with NAPALM, it was always on our own terms. Because the problem is, bands… Sometimes if you're a newer band, they go, perhaps, into an arrangement with a label thinking that, 'Oh, we can't upset things, because we're only a new band and they'll just disown us.' But if you can't be happy knowing that you're doing what was your creative plan to do, then there's surely something wrong with that; there has to be. So at any stage, NAPALM was always, like, with the labels, if we felt something was fundamentally wrong, we would say, 'No. It's not happening. We're not doing it. Forget it. It's not gonna happen.' So we always maintained that and we've always set that precedent. Every time we've walked into a record label, we've always said, 'Look, we know what we're doing, and we know how we need to do things. Sure, you've got your things that you need to do, but creatively and stuff, we know best. And that's what we're gonna do. And if there's anything that's ethically not right, or doesn't feel right, then we just won't do it.' And we don't do it in a threatening way; it just becomes a common understanding. And it works for us. But bands have gotta realize that… If I was in a new band, I would rather be in a band and be cut away from a record label than having to be in a situation where I wasn't happy with how they were putting the band forward, if they tried to interfere with the sound of the band. It's not worth it. It's not worth being unhappy in your situation. You may as well cut loose and start again."

NAPALM DEATH recently entered the studio to begin recording the follow-up to 2012's "Utilitarian" for an early 2015 release.

The band performed a brand new song, "Dear Slum Landlord", on April 10 at the Roadburn festival in Tilburg, The Netherlands.

"Utilitarian" sold around 2,200 copies in the United States in its first week of release, according to Nielsen SoundScan. The CD debuted at No. 14 on the Top New Artist Albums (Heatseekers) chart, which lists the best-selling albums by new and developing artists, defined as those who have never appeared in the Top 100 of The Billboard 200.

"Utilitarian" was released on February 27, 2012 in Europe and February 28, 2012 in North America via the band's longtime partner, Century Media Records. 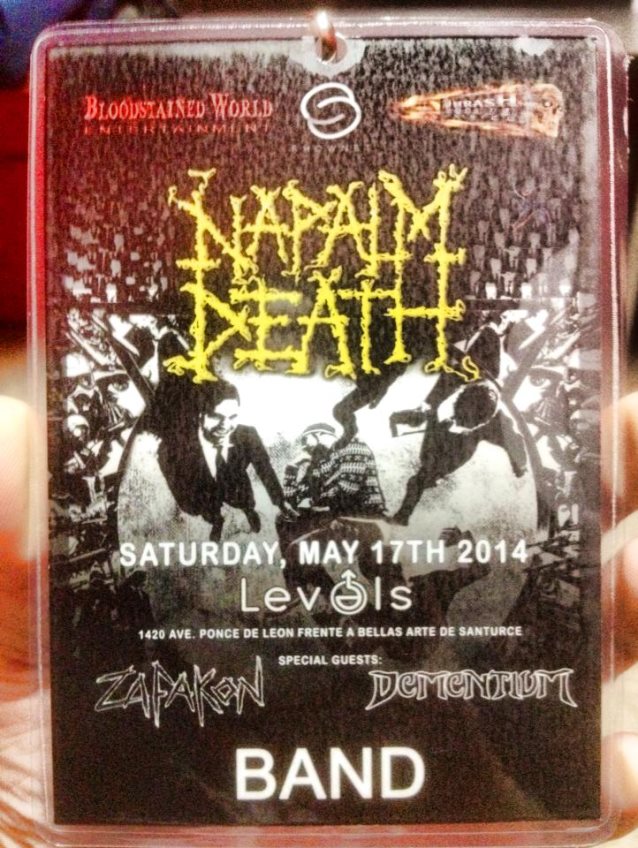