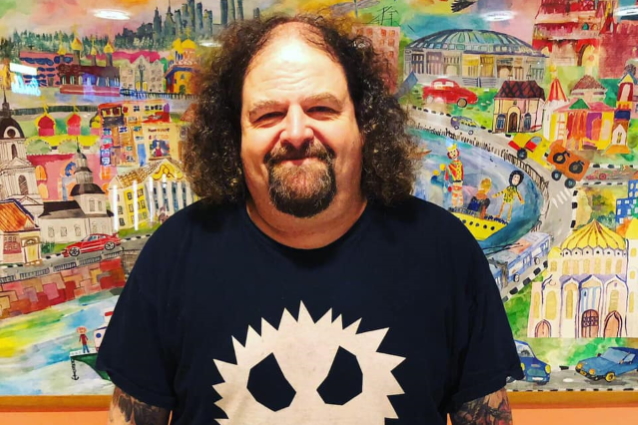 NAPALM DEATH's SHANE EMBURY To Miss U.S. Tour With MUNICIPAL WASTE, SICK OF IT ALL

NAPALM DEATH bassist Shane Embury will not be able to join his bandmates on their upcoming U.S. tour with SICK OF IT ALL and MUNICIPAL WASTE. Filling in for him will be Vernon Blake, a longtime friend and NAPALM DEATH roadie who has previously played guitar in the band ANARCHUS.

Embury announced his absence from NAPALM DEATH's tour in a Facebook post earlier today. He wrote: "Due to circumstances beyond anyone's control, I will not be able to grind on the U.S. tour with SICK OF IT ALL and MUNICIPAL WASTE. Driving the bass bulldozer will be Vernon Blake, long-time friend and veteran grindcore/hardcore dealer with his Rigid Records label."

NAPALM DEATH's trek with MUNICIPAL WASTE, SICK OF IT ALL and TAKE OFFENSE will kick off on October 3 in Dallas, Texas, and run through an October 23 show in Los Angeles. Four of the first five dates, including three in Texas, will see REVOCATION, VOIVOD, PSYCROPTIC, SKELETAL REMAINS and CONJURER all joining the bill.

NAPALM DEATH is continuing work on its long-awaited new album for a tentative early 2020 release. The follow-up to 2015's "Apex Predator - Easy Meat" will feature an appearance by guitarist Mitch Harris, who has been taking a leave of absence from NAPALM DEATH since late 2014 to focus on his family life.