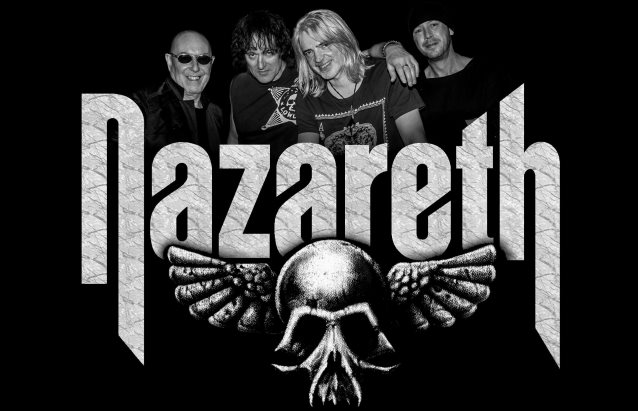 NAZARETH Signs With FRONTIERS MUSIC SRL; New Album Due In 2018

Frontiers Music Srl has announced the signing of legendary rockers NAZARETH. The band's brand new studio album will be released in 2018.

The current lineup of NAZARETH consists of Jimmy Murrison (longest-serving guitarist in the band's history),Lee Agnew (drummer since Darrel Sweet's death in 1999),Pete Agnew (founding member, on bass) and new singer Carl Sentance (who joined the band in 2015 after Dan McCafferty had to retire due to illness).

Pete Agnew says: "With Carl as our brand new singer and Frontiers as our brand new record company, the buzz surrounding us right now is the same as it was when we went in to record our very first album. Can't wait for the sparks to fly!"

Originally coming together as THE SHADETTES in 1968 in Dunfermline, Scotland, the entity known as NAZARETH came together in spring 1970 and released their eponymous debut album in 1971. The band came to prominence after the release of the Roger Glover (DEEP PURPLE, RAINBOW) produced "Razamanaz" in 1973. Two more successful releases, "Loud 'N' Proud" and "Rampant", followed before the release of "Hair Of The Dog" in 1975, which was an unqualified success. The title track was a staple of '70s rock radio and the ballad "Love Hurts" is a worldwide hit.

NAZARETH mantained a solid sales history during the '80s, particularly in Germany, where "Dream On" became a hit single. A tribute of note to the band came in 1993 when GUNS N' ROSES covered "Hair Of The Dog" on their "The Spaghetti Incident?" album.

To date, NAZARETH has recorded 23 studio albums, earning them platinum, gold, and silver awards around the world. Their latest release, "Rock N' Roll Telephone" was released in 2014 and generally hailed by music critics as another masterpiece in a long line of them from the band.