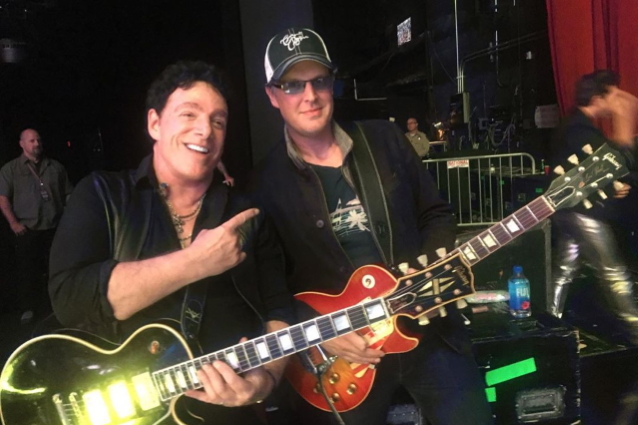 Neal Schon, JOURNEY founder, recently joined forces with Joe Bonamassa onstage at their respective shows at The Colosseum at Caesars Palace in Las Vegas. As reported by Vegas News, on October 26, during the final performance of JOURNEY's sold-out, nine-show residency, the legendary artists first faced each other on "Lovin' Touchin' Squeezin", exchanging leads for an extended version of the classic JOURNEY hit single. Then, the following evening, Bonamassa introduced Schon to join him for the B.B. King song "Nobody Loves Me But My Mother".

Bonamassa shared a photo of him with Schon on social media after the October 26 concert and added in an accompanying message: "Woah... This just happened! Thank you Neal Schon and the incredible band JOURNEY for having me up tonight at Caesar's Palace. Got to see a lot of friends and I must say their crew are some of the nicest most professional people I've ever been around."

JOURNEY will return to The Colosseum for four shows this winter. The residency will resume on December 27, followed by shows on the 28 and 30, as well as a special New Year's Eve gig on December 31.

Woah... This just happened! Thank you Neal Schon and the incredible band Journey for having me up tonight at Caesar’s...