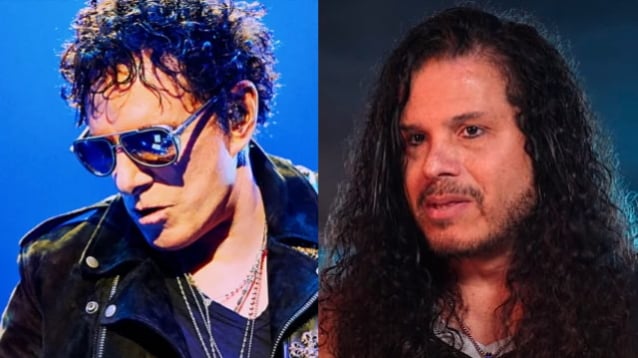 Soto, who previously sang with Yngwie Malmsteen, joined JOURNEY about a week and half into a six-week summer 2006 tour with DEF LEPPARD, after Steve Augeri began having vocal issues. Soto had earlier worked with Schon and drummer Deen Castronovo in the short-lived side project SOUL SIRKUS. JOURNEY named Soto its permanent lead singer in December 2016 before firing him just five months later.

Jeff discussed his time with JOURNEY during a recent interview with Argentinian journalist Lucas Gordon. Asked what caused his split with the band, Soto responded: "The problem is I don't know. That's the problem. If I knew what the problem was, if I knew the reason why I got fired, then at least I could be at peace with it; I could find a way to discuss it or talk about it. But I'm not legally supposed to talk about it, because when we finally… It got to the point where we had to take it a legal side of things. But to get away from the legal side, I signed a document that I wouldn't talk about anything negative, anything bad about them. And I don't wanna talk negative; I don't wanna talk about anything bad. But if I knew the reason… And this is not bad — I'm not saying anything bad about them; I'm just telling you the truth. My truth is if I was told why I was fired, if I was told 'your voice sucks,' if I was told I killed one of the guys' dogs, if I made somebody in their family angry, if I was told the reason why I was fired, I could make peace with it. But to this day, 14 years later — whatever it is — I don't know. I don't have the answers. I was never given a proper reason. The only thing I was told was they had a change of heart. It didn't make sense to me. If you have a change of heart, call me up and we can say goodbye, we can hug and say, 'Hey, hopefully I can get a couple of tickets to the show with the new singer.' That kind of stuff. You can leave as friends. I came in as friends; I wanna leave as friends."

Schon responded to Soto's remarks in a comment on the BLABBERMOUTH.NET Facebook page. "It was unfortunate but Steve Augeri's voice gave out. We were in the middle of DEF LEPPARD tour so I was working with Jeff on side project and suggested he come in and help Finnish the tour. It went well but all were not sold on him being the lead singer after writing a tune and listening. Both Jon and I agreed it didn't sound right- or better put what we wanted. I hope this satisfies this on going drama. It didn't work out."

Earlier today, Schon added in a separate comment on the BLABBERMOUTH.NET Facebook page: "This is all boring and overly redundant whining of 14 years ago. PR stunt at best. Zzzzzz Jeff tried to sue us after we let him go and playing with us live for only 1 tour. This did not sit well with myself and could easily see personality clashes way too early. Good night".

Three years ago, Soto told "The Robbcast Podcast" that performing JOURNEY's classic songs originally sung by Steve Perry was no easy task. "It was difficult — it was really, really difficult to adapt," he admitted. "First of all, my voice was already kind of going through its changes. If I had gotten that JOURNEY gig even five years earlier, I would have destroyed, I would have just killed the range, the intensity of what Perry left behind."

Asked if JOURNEY ever made him an official member of the band, Jeff told "The Robbcast Podcast": "In December of 2006, when the entire DEF LEPPARD run was done for the year, there was an official press release that they inducted me as their permanent singer at that point. And this is the part that kind of pisses me off still to this day, because there's zero mention, there's zero attention brought to the fact that I was even in the band and I did those tours. You look at the JOURNEY web site, I don't exist — my name is not there. It goes from Perry to Augeri to Arnel [Pineda]. It's like it didn't exist. It's kind of strange. How can that not exist when I have… I have photo clippings. I even still have URL sites that show you when I was officially made a member of the band. And then for them to act like it didn't exist or to say that they wanted a signature sound and I was only supposed to be a hired gun and just to get them through the tour, that kind of bums me out, man. 'Cause have at least enough respect to tell the truth or to even sugarcoat it and say, 'Yeah, Jeff was a permanent member of the band, but we realized, as we were going into that, that it was a decision we had to change and that's why we moved on or eventually got Arnel,' or whatever. Because I was in the background listening to Neal doing interviews when we were doing the European tour, saying I was their new singer and that we could finally get past the ghost of Steve Perry and blah blah blah. I was there, and I heard all of that. And to not have that acknowledgement now, it just hurts."

Last year, Soto told the "Rehired" Internet show that he was left in a precarious position once he was fired by JOURNEY.

"I don't really go into defense mode unless I'm being attacked where it's not justified," he explained. "I went more into warrior mode, kind of survivor mode — what do I do next, kind of thing. And to be honest with you, I was just more hurt about the situation and only hurt in the sense of, everything on their social media, web site, whatever, anything that had to do with me being in the band was removed. There was no photo of me; my name was gone. It literally went from Steve Perry to Steve Augeri to Arnel Pineda. And it stinks. It stinks to feel like I didn't matter. That validation, to be able to front that band, to be able to sing those songs and to front them, and the trust and respect they gave me to be able to do that is completely washed away, because I can't even be part of their history.

"I didn't expect an invitation to the Rock And Roll Hall Of Fame, I didn't expect my name to be dropped, but even just to be able to see some level of positivity of my time with them, and to not have any of it, that's the part that hurt," he added. 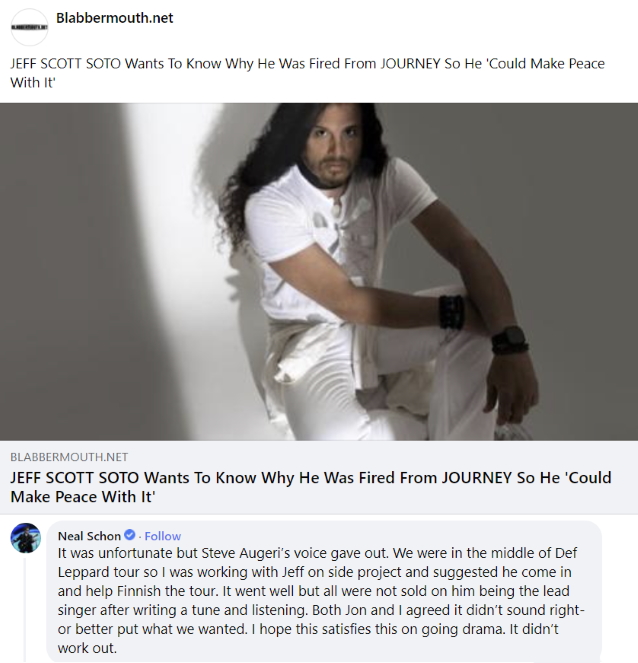 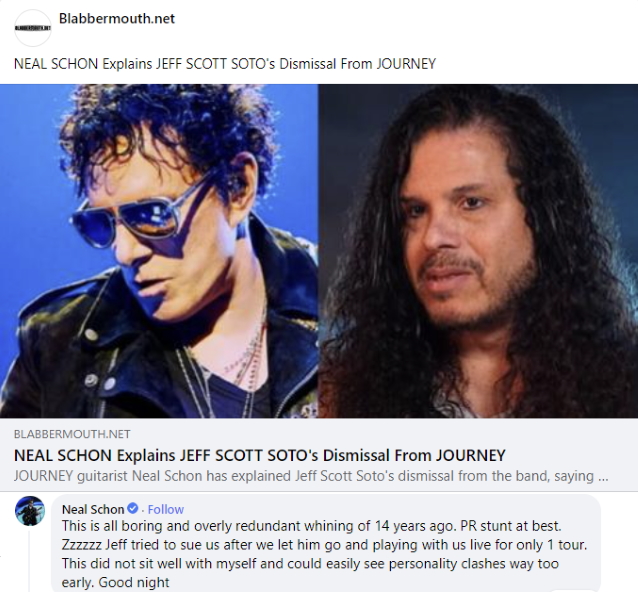