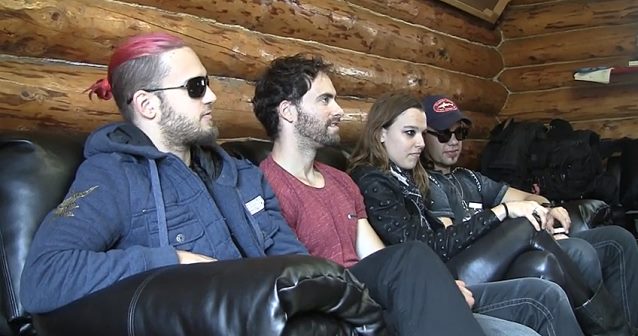 The Dude of the 106.5 KWHL radio station conducted an interview with Pennsylvanian rockers HALESTORM before their August 23 concert at the Alaska State Fair in Palmer. You can now watch the chat in two parts below.

The Pulse Of Radio asked Lzzy Hale if the band had ever been denied permission to record a song for one of these EPs. "We were denied after the fact, actually, on the last cover EP," she said. "We thought we had gotten approval for 'Out Ta Get Me' by GUNS N' ROSES, and apparently everybody had approved it but Axl [Rose] — but nobody told him. So we had recorded it, we released it, and then he found out and I guess — what was the stipulation? We, like, could do it digitally but not physically, which I thought was kind of weird."

Hale said about the new EP, "Like our first 'ReAniMate' EP, the songs included here are a collection of both our favorite songs and songs to challenge ourselves. We decided to go more 'bare bones' with this EP, meaning minimal production with live, gritty performances. We recorded this EP the week of the Grammys, so the excitement and debauchery you hear through your speakers is very real."

HALESTORM won the Grammy Award for "Best Hard Rock/Metal Performance" for the track "Love Bites (So Do I)", from the band's second album, "The Strange Case Of…"

The latest single from the 2012 release is "Here's To Us", which was also featured on a February 2012 episode of "Glee".

HALESTORM is currently on a North American tour that ends in early October, after which the band will head to Europe. But they'll be back in late November for one more round of North American shows to finish out the year.