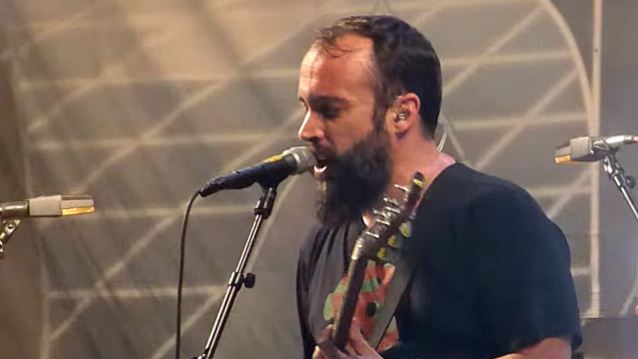 NEIL FALLON: Next CLUTCH Album Will 'Have A Lot In Common' With 'Earth Rocker'

Vocalist Neil Fallon of Maryland rockers CLUTCH spoke to Pollstar.com about the band's forthcoming album, due later in the year. He said: "There's nothing out of the ordinary of the CLUTCH canon [on the new CD]."

He continued: "I think these songs were written so soon after [2013's] 'Earth Rocker' that they have a lot in common. It's a faster record. It think it shares a bit of the sense of humor, lyrically, with 'Earth Rocker'. There are a lot of hooks on this record."

Fallon added: "It's hard for me to comment, because I'm still in the middle of it, still listening to mixes and stuff. I think it's another offering of our sincerest rock emotion."

Asked if the creation process has become easier or harder over the years, Fallon said: "It's become, maybe, more difficult… speaking for myself, to satisfy the urge to do something new, while, at the same time not deny one's strengths that got you there in the first place."

He continued: "It's very easy for us to write together because we know each other so well. The danger in that is that ease can also breed complacency.

"I think we're always trying to learn to try something new, even if it's a minor thing. Lyrically … there's feast or famine. "