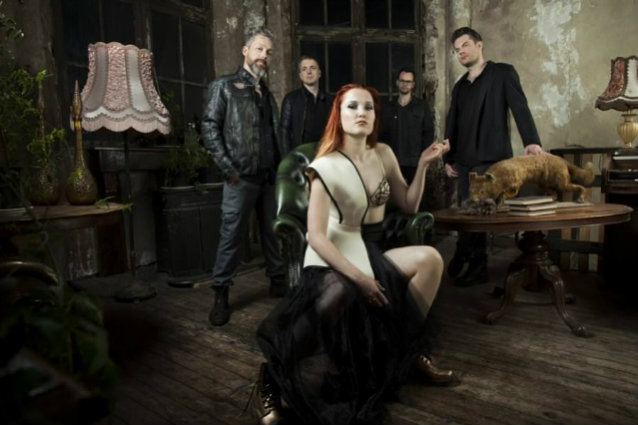 NEMESEA Releases Video For Alternate Version Of 'Hear Me'

Dutch female-fronted rockers NEMESEA have released an alternate version of the song "Hear Me". The track, which originally appeared on the band's latest album, 2016's "Uprise" (Napalm Records),features vocals by NEMESEA's latest addition, Sanne Mieloo. Sanne joined NEMESEA in May 2017 as the replacement for Manda Ophuis, who decided to leave the band in 2016 to focus on her education job with highly gifted children.

Says the band: "NEMESEA is banging on your door with this new version of 'Uprise' track 'Hear Me'. Vocalist Sanne pulls off a tour de force with audible ease and the new dirty key sound production by Matthijs offers you a glimpse of NEMESEA 2.0!"

Back in 2006, NEMESEA became the first band internationally to succeeded in a crowdfunding campaign for its new album. They also broke new ground when they performed two unique live shows in 2009 in P3, Purmerend, Holland in full 9.2 surround sound.

With "Uprise" and "Forever" single receiving positive reviews, the NEMESEA members were determined to go on following Manda's departure. Auditions were held in October and November 2016 and Mieloo was chosen to front the group after she persuaded the musicians with her great voice, versatility, stage presence as well as her fresh ideas.

NEMESEA's first collaboration with Sanne was the single "Dance In The Fire", which was produced by Guido Aalbers and released last spring.

Sanne studied cum laude at the Conservatory, wrote her own musical theater performances and was connected to several productions by live entertainment company Stage Entertainment. She's also performed in several musicals, including "Tarzan" and "Sister Act". That said, her talent hasn't gone unnoticed; over the last three years, Sanne performed in several productions in Germany, Austria, Poland and Japan. Apart from her work in the theater world, she has experience in the music scene as well; she's travelled as a backing vocalist for singer Oonagh across major venues in Germany. Most recently Sanne played a leading role in the musical "Tanz Der Vampire" in Switzerland.