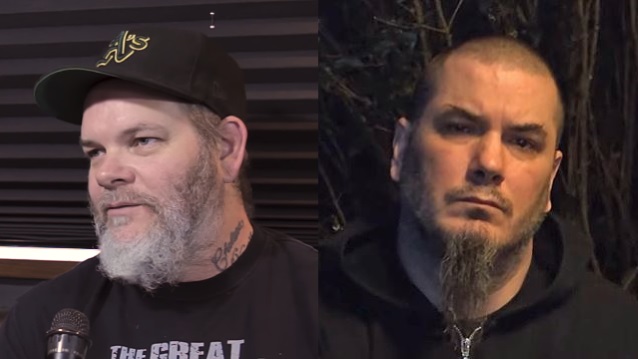 NEUROSIS's SCOTT KELLY On PHILIP ANSELMO: 'I Think He F**ked Up, Man'

NEUROSIS guitarist/vocalist Scott Kelly says that Philip Anselmo "fucked up" when he gave the right-arm salute and yelled a white-supremacist slogan at a California concert almost two years ago.

At a January 2016 "Dimebash" event at the Lucky Strike Live in Hollywood in honor of late PANTERA guitarist "Dimebag" Darrell Abbott, Anselmo performed the PANTERA classic "Walk". As he left the stage, he made a Nazi-style salute. The former PANTERA frontman appeared to say "white power" as he made the gesture, but later claimed he was joking about drinking white wine backstage and was reacting to the audience members up front who he says were taunting him.

During a recent interview with Exclaim.ca's Aggressive Tendencies, Kelly was asked for his opinion on the incident. "I think [Anselmo] fucked up, man," he said. "I think Phil really said some shit that you can't really take back.

"I think that Phil's an intelligent guy and I think that… From what I've heard, he's taken steps to change his life and he's taking things more seriously," Kelly continued.

"He's the kind of guy that can have a lot of influence in the world. A lot of people listen to what he says and a lot of people respect him and kind of follow his lead. So I just hope that he chooses a positive path to go down with it, because that was ugly, man — it was really ugly."

Scott also recalled the experience of touring with PANTERA back in 1996 and 1997. "They treated us great," he said. "Absolutely. We couldn't have asked to be treated with more respect. Honestly, we were just… I don't think we contributed very many people to the door of those shows — those guys were packing them in at the time. And they let us have this spot and do what we were doing every night and gave us full use of the P.A. and paid us what we needed to be paid and made sure that we always had food and a nice dressing room, and they were always looking out for us. It was a totally good time."

Seven years after NEUROSIS's final tour with PANTERA, Dimebag was shot and killed by a crazed gunman while performing with DAMAGEPLAN at a Columbus, Ohio rock club in December 2004.

"It's just such a shame the way everything shook out for those guys, man," Kelly said. "You can't discount all that shit into this situation. Honestly, I can't imagine what it would be like to go through losing one of your guys the way that they did and the reverberations of that fucking brick being thrown into the lake and the fucking… You know what I'm saying? The reverberations from that moment are… It's gonna be a long time, and cause a lot of shit and wreak a lot of havoc in people's lives. So, yeah, I just hope for the best out of it."

Anselmo recently blasted "false journalism in the metal community" for suggesting he was racist because of the "Dimebash" incident, insisting that he was treated unfairly by people who jumped to conclusions without attempting to find out the facts.

"From the second I got on stage, I was heckled constantly by a couple of motherfuckers with an agenda," he told Mass Media Magazine about the night in question. "I had warned them several times to stop. You can clearly hear me do this several times, 'cause I had the microphone in my hand. You can hear me say, 'If you call me that one more fuckin' time, I will invite you on this fuckin' stage so I can break your fuckin' jaw!'

"Unfortunately, I showed those kids what they were fuckin' looking for. The scary things, and the ugliness. And ugly it was. I get it. But did I lay a fuckin' finger on anybody? I said what they wanted to hear… and that's on me.

"The outcome wasn't meant to support racism. That is just not me, and those who know me, they know that."

Former PANTERA drummer Vinnie Paul Abbott, who hasn't spoken to Anselmo since the band's split in 2003, was dismissive when asked for a comment on the singer's white-power salute. "I can't speak for him," Vinnie said in a 2016 interview. "He's done a lot of things that tarnish the image of what PANTERA was back then and what it stood for and what it was all about. And it's sad."