KnuckleBonz has announced it is working with yet another fantastic brewing partner, Great South Bay Brewery, to extend the offering of amazing beers for the AC/DC music superfan.

KnuckleBonz has extended its limited-edition beverage series with Great South Bay Brewing and the two companies have worked together to create a custom offering for AC/DC to offer fans a rockin' new beer, the AC/DC For Those About To Rock Ale and their distribution partner, Half Time Beverage, will process the orders and ship to 33 states in the U.S.

AC/DC For Those About To Rock Ale is available now to ship direct to consumer in 33 U.S. states.

AC/DC For Those About To Rock Ale (5.9%) is cold fermented for the cool, crisp, refreshing flavor you'd expect from a sessionable Australian lager. By combining traditional Australian brewing methods with native Aussie hops and cane sugar, the brewers have developed a highly drinkable beer that is true to its heritage, with a clean citrusy hop profile, a subtle malty sweetness, and a bright straw color.

With several award-winning craft ales and lagers, IPAs and seltzers, Great South Bay, also known as GSB, is a huge presence in the Long Island, New York community with their state-of-the-art 40,000-square-foot facility that combines contemporary brewing technology with traditional craftsmanship. GSB works to create recipes that speak for itself in quality and taste.

Chris Davis of Great South Bay Brewery said: "Walk into any venue in the world and you'll bear witness to the seemingly natural pairing of beer and music. In fact, I would venture to guess that since the invention of alcohol, consumption of beer and creation of music has been done in tandem. When we were presented the opportunity to work with KnuckleBonz to combine our crafts, it was one of those 'aha!' moments. To say that we are excited about what we have been able to come together and create would be a massive understatement."

Tony Simerman, CEO/creative director of KnuckleBonz, Inc., said: "These new partnerships will take the KnuckleBonz beverage line to a new level giving AC/DC superfans across most of the U.S. a chance to rock hard with For Those About To Rock Ale."

Chris Weiss, director of marketing for Half Time Beverage, said: "Stocked with over a thousand different craft beers, ciders, hard seltzers, and other beverages from some of the most sought-after breweries and producers in the world, Half Time is a virtual beer marketplace unlike any other." 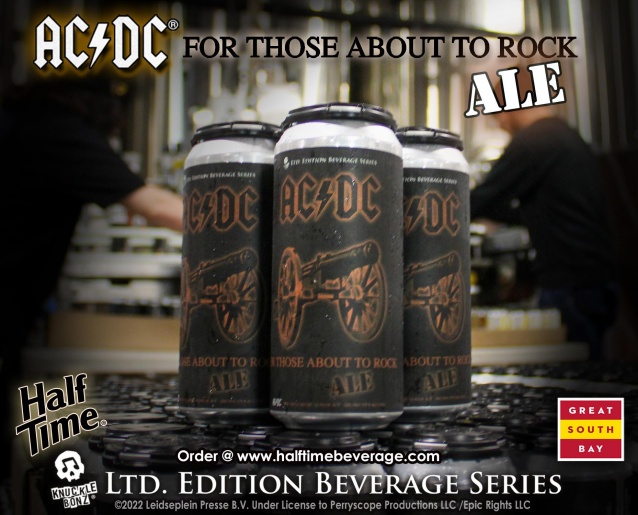