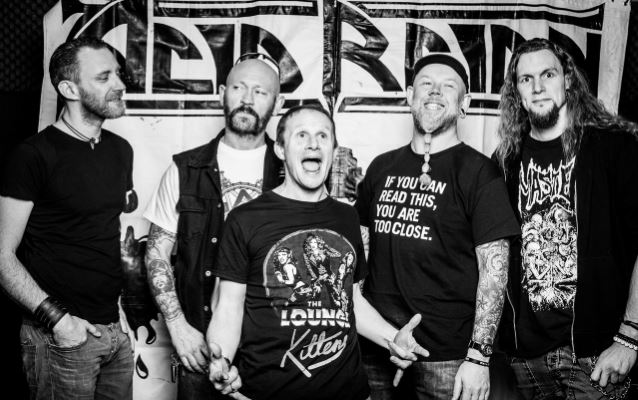 Vocalist Howard "H" Smith of reactivated U.K. thrashers ACID REIGN recently sat down with his new bandmates to discuss how they came to be in the band, how it feels for them and what the future plans are. The hour-long chat, which was made available as part of Smith's comedy metal podcast for web site All About The Rock, "Talking Bollocks", can be streamed below.

Twenty four years is a long time in anyone's book, but that is how long it's been since the "Kings Of Apple Core," ACID REIGN, have been missing from the U.K. thrash scene.

Calling ACID REIGN's return more of a reboot than a reformation, sole original member Howard "H" Smith comments: "I tried to put the old lineup back together, [but] the guys were unable to do it for differing reasons. Then, in the summer of 2014, I started toying with the idea of a new lineup and it came together quite quickly."

He continued: "We're taking it slowly, learning the old stuff and playing with new ideas too.

"It's not a reformation it's a reboot. Even if it was the old lineup, it would be different; it's been 24 years!

"The main thing is that the goodwill toward ACID REIGN has never been stronger. Everywhere I go, people are saying we should come back, and eventually I actually fucking listened!"

A band considered ahead of its time by many, ACID REIGN was one of the leading lights of the U.K. thrash attack and spent time on the road with the likes of EXODUS, NUCLEAR ASSAULT, DARK ANGEL, SUICIDAL TENDENCIES, DEATH ANGEL, FLOTSAM AND JETSAM and CANDLEMASS. Signed to Music For Nations subsidiary Under One Flag, the band would release two albums (including the seminal "The Fear"),two EPs and "The Worst Of" compilation before calling time on the band in 1991, their final appearance being at the world-famous Marquee club in London.

ACID REIGN first started to show signs of life once again in 2011, when Lost & Found Records released remastered versions of their albums and EPs. The reaction to the reissues — which were remastered by legendary producer Bill Metoyer (SLAYER, D.R.I., FLOTSAM AND JETSAM) — was so good that the band started to receive a stream of requests about when ACID REIGN might take the stage again.

Despite the interest, though, all remained quiet on the ACID REIGN front until the Candlelight release of the extensive box set "The Apple Core Archives". The set was a three-CD-only collection of every song ACID REIGN had ever put out, with new sleeve notes, unseen pics, demos and housed in an Apple Core-themed box.

Since this release, Smith has been actively working on the all-new ACID REIGN reboot and looking forward to bringing the band back where they belong — on stage!

Says Smith: "Finally, the rebooted lineup is complete. It's taken nearly two years, but I can honestly say it's been worth the wait.

"Typically, we're doing things differently to everyone else, as where they reformed (and believe me, we tried),we are now rebooting.

"Everyone in the band has ACID REIGN in their DNA. Some of the guys knew the band back in the day and some didn't, but everyone is on the same page and we can't wait to get out there and show the world how much it has been missing us."

Since ACID REIGN called it a day in 1991, "H" hasn't let the grass grow under his feet. He's been based in London and performing as a standup comedian since 1994 as himself and also as his alter ego "Keith Platt Professional Yorkshireman." Musically, he has recorded a song, "A Mother's Love", with Italian thrash band SATANIKA, based on ACID REIGN original "Motherly Love", featured on SATANIKA's "The Plague Of Thrash" album in 2010. In 2014 he also recorded a guest spot on two songs on SUICIDE WATCH's new mini album, "Alienation Zone". There has also been many guest live appearances with RE-ANIMATOR and old mates LAWNMOWER DETH. In August 2014, Howard oversaw the release of "The Apple Core Archives" on Candlelight Records, a triple-CD box set of the band's entire career. Howard also hosts the world's only comedy metal podcast for web site All About The Rock, "Talking Bollocks".

Came highly recommended to the band by ex-ACID REIGN guitarist Kevin "Kev" Papworth, who told "H", "He's a great guy, a good laugh and daft as a brush."

Influenced by musicians such as Bill Ward, John Bonham and Cozy Powell, Marc has been a drummer since the age of thirteen, playing across the world with a host of bands, including M:PIRE OF EVIL, BEYOND THE GRAVE, SABBATICA (BLACK SABBATH tribute),METALIZER and MINNIKIN.

Pete has worked on both sides of the glass as both a producer and a musician. He's a member of the highly rated KREMATED as well as hardcore outfit BUN DEM OUT and has enjoyed stints in ROGUE MALE, REACTOR and VIRAL TECHNOLOGY. A chance phone call in early 2015 led to him joining ACID REIGN. He recalls: "Some bloke calling himself 'H' phoned me up in February 2015 and asked me to audition for ACID REIGN, which was very cool, as KREMATED were planning on doing a cover of 'Goddess'. Now I get to play it in the real thing!"

Paul did actually play with ACID REIGN in 1990 on "The Joke's On Us" tour when he was dragged onstage by H from the audience at the Marquee to rip through "Motherly Love". Paul was the band's first choice to replace Adam when he quit in 1990, although it's taken until 2015 for Paul to actually get offered the role! As a member of acclaimed metal act DIED SMILING, Paul toured with STUCK MOJO and appeared at the U.K.'s best metal festival, Bloodstock Open Air.