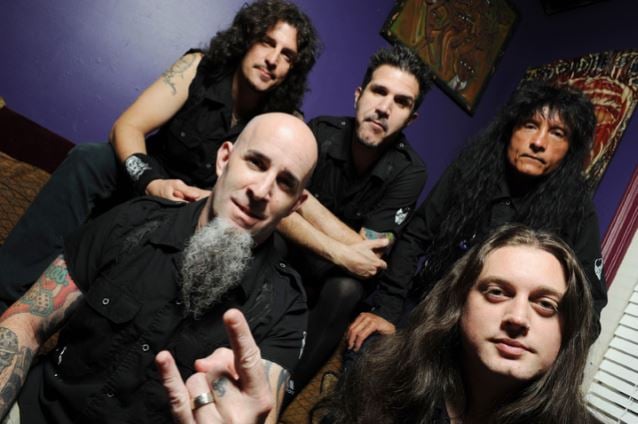 According to Johann Stepien of LoudTV.net, ANTHRAX has set "For All Kings" as the title of its long-awaited new album, due in March 2016 via Megaforce in North America and Nuclear Blast in Europe. The information was revealed during a private listening session for the CD on October 26 in Paris, France. An interview with ANTHRAX bassist Frank Bello conducted by LoudTV.net that same day can be seen below.

Speaking about the new ANTHRAX album, Bello told LoudTV.net: "I'm very excited because it's been a while since [2011's] 'Worship Music'. Now, you have to understand, from our perspective, we came out with 'Worship Music', and thankfully — and thank you, God — people have really taken to it and said… For people to say… A lot of people said it was our best work to date. After thirty years, it means a lot to us. So we felt like, as fans, we want to put out the best product, the best music, and that's what we think we've finally… After nitpicking these songs… I mean, we really took them apart and really took our time with them. I think, as fans that we are, I think this is the time to let this record go, to let it out [so] people ]can] hear it. I can't wait to play these songs; I honestly can't wait to play these songs live, because you just feel as a fan how people are gonna react to 'em. It's a lot of energy — a lot of energy."

Bello also talked about ANTHRAX's continued collaboration with producer Jay Ruston, who has previously worked with STONE SOUR and STEEL PANTHER, among others. He said: "Jay Ruston, he's the 'fifth Beatle.' We call him the 'fifth Beatle' because Jay was with us from the beginning of the writing. It was very important to have him there, because, I think, Jay has a great ear for ANTHRAX. He has a great ear as a producer anyway. But he knows how to talk to us, and he's really honest. 'Nah…' [Laughs] 'That works better.' And it's easier that way, 'cause sometimes you're not sure. 'What do you think? Which one's better?' Even in my bass stuff. He's a bass player. So I'll ask him, 'Does this work? 'Hmm… Try the other one. It's better.' And he's honest. So Jay is definitely an ANTHRAX member at this point."