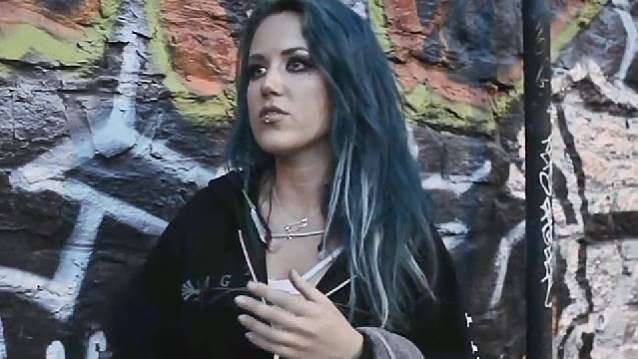 Alissa White-Gluz, former vocalist of Canadian extreme metallers THE AGONIST who was named the new lead singer of ARCH ENEMY following the departure of Angela Gossow, has released the following statement:

"To all my fans, friends and supporters,

"I am very honoured and happy to announce a new chapter in my life and musical career beginning now; I have joined forces with one of my all-time favourite and globally respected bands, ARCH ENEMY. 'Wages Of Sin' was the first metal album I ever bought and it was love at first listen. It is not often that you get a phone call from your favourite band asking you to join! I am thrilled to have the opportunity to work with such amazingly talented musicians whom I also consider great friends.

"But it is with great sadness that I must also announce that THE AGONIST as you have come to know it is now a thing of the past. I had every intention of (and had even started) writing and recording yet another killer album this year, but my former bandmates decided to choose a different path. I wish I could change the situation, but the unfortunate decision was made beyond my control so I can only wish them the very best of luck now that our time working together has concluded. I will always be proud of the three albums we created since 2005 and I would like to show my appreciation for the incredibly open-minded and loyal fans that I have come to know through my past decade of work in the metal scene. Thank you for accepting every bit of eccentricity I threw your way. Everything from the band name to the lyrics, the songs, the artwork and visuals, the photo shoots, harmonies, melodies, (etc); I created every bit of those with immense thought and passion. I can assure you that I will continue to pour my creativity into writing, singing and performing and look forward to your continued support with ARCH ENEMY. Thank you all so much for believing in me and allowing me to express myself in a completely boundless way.

"Very importantly, I have to thank Angela Gossow for being my mentor and guardian angel over the years — I can honestly say that without her love and support, I would not have been able to make it through as much as I have. Angela has been an inspiration, an invaluable friend and I am proud to now call her a partner. I am very humbled and grateful to her, Michael, Daniel, Sharlee and Nick for entrusting me with the ARCH ENEMY torch. I feel very privileged that they have welcomed me not only to take over as vocalist but also to contribute to the writing process, since lyrical integrity is important to me. Everything about this new relationship feels so right and I think our music is representative of how strong the creative chemistry is. I'm ecstatic about the music we are making! I would also like to extend my deepest and most sincere gratitude to all the members, crew and fans of KAMELOT for believing in me, encouraging me and showing me endless love and appreciation over the years. It really means the world to me.

Thank you, again, to all my fans, family, colleagues and friends who supported my work all along for your relentless loyalty. I look forward to being able to write and perform at a whole new level now with ARCH ENEMY!

"Music is forever, metal is limitless and this is only the beginning!"

ARCH ENEMY will debut new material on a short Eastern European tour before the album is released; this trek will then be followed by an extensive run of European summer festivals, including Sweden Rock Festival, Wacken Open Air and many more. A full headlining tour in North America and Europe will take place in fall/winter 2014.

On March 20, ARCH ENEMY will present the video for the album's title track, "War Eternal".

THE AGONIST has announced the addition of singer Vicky Psarakis to the group's ranks.

THE AGONIST's third album, "Prisoners", debuted at No. 19 on the Top New Artist Albums (Heatseekers) chart, which lists the best-selling albums by new and developing artists, defined as those who have never appeared in the Top 100 of The Billboard 200.