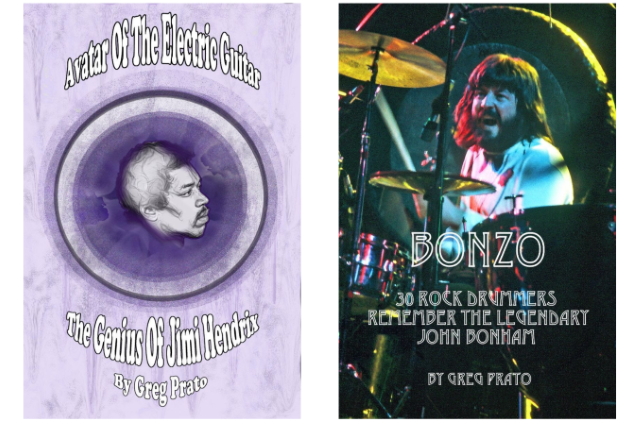 This September marks 50 years since the passing of Jimi Hendrix and 40 years since the passing of John Bonham. To celebrate both legendary and influential artists, respected author/journalist Greg Prato has assembled two new books, "Avatar Of The Electric Guitar: The Genius Of Jimi Hendrix" and "Bonzo: 30 Rock Drummers Remember The Legendary John Bonham". Each book is priced at $19.99 for the paperback and $9.99 for the Kindle version. Both are available from Amazon.

It is widely believed that Jimi Hendrix was one of the greatest rock guitarists of all time...and quite possibly, THE greatest. All you have to do is compare what rock guitar sounded like before Jimi burst on the scene in the late '60s, and what it sounded like after. And in addition to trailblazing new sounds and approaches, his influence reached beyond just the guitar community — he quickly became the literal poster child for the psychedelic rock movement, due to his unique fashion, song lyrics, and a now-iconic performance at Woodstock. But sadly, Jimi's story also remains one of rock's most tragic – dying at the age of 27 on September 18, 1970 (just as he was playing some of the biggest concerts of his career and entering a new musical phase). To mark 50 years since his passing, "Avatar Of The Electric Guitar: The Genius Of Jimi Hendrix" has been assembled – comprised of interviews with renowned guitarists (including Kirk Hammett, Alex Lifeson, Steve Vai, John Petrucci and Kim Thayil, among others),discussing what made Jimi so special, and ultimately, a legend.

Few rock drummers remain as universally praised as LED ZEPPELIN's John Bonham. Listen to any ZEPPELIN album, and you will hear a virtual showcase on expert rock drumming — while never getting in the way of the group's other members and their contributions, singer Robert Plant, guitarist Jimmy Page and bassist John Paul Jones. But sadly, one of rock's all-time greats died tragically young — he was only 32 years old — resulting in the end of one of rock's most celebrated bands. To mark 40 years since his passing, "Bonzo: 30 Rock Drummers Remember The Legendary John Bonham" has been assembled — comprised of interviews with some of the top drummers of rock (including Kenny Aronoff, Mike Portnoy, John Dolmayan, Brian Tichy and Steve Gorman, among others),discussing what made Bonham such a special and unforgettable drummer.

Prato is a writer and journalist from New York, whose writing has appeared via such outlets as Songfacts, Vintage Guitar magazine, and BraveWords. He is also the author of several popular books, including "Take It Off: Kiss Truly Unmasked", "Touched by Magic: The Tommy Bolin Story" and "A Rockin' Rollin' Man: Bon Scott Remembered", among many others. And you may have even heard him on one of his many radio or TV appearances, which include interviews on "The Howard Stern Wrap-Up Show", "Eddie Trunk Live" and "Feedback With Nik Carter And Lori Majewski". "Avatar of the Electric Guitar" and "Bonzo" are his 31st and 32nd books overall.