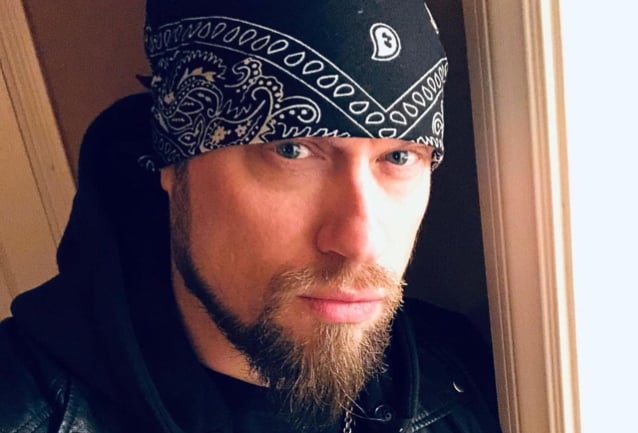 "I knew Charlie [Engen], the [current FIVE FINGER] drummer, 'cause we'd toured before with Angel Vivaldi, and he was the drummer for Angel and SCALE THE SUMMIT," Andy recalled (transcribed by BLABBERMOUTH.NET). "We had that one song that we did that we all kind of jammed together at the end, so we got to play together and got to know each other on that. I was really stoked when he was announced as the new drummer for FIVE FINGER. And I guess they just kind of got talking.

"Zoltan [Bathory, FIVE FINGER guitarist and founder] is a big fan of guitar players in general — going on Instagram and seeing what's new and who's about," he continued. "I think he's always interested in seeing who's around and what things are out there. And I think I came up in conversation at one point, and Charlie had told him that we knew each other. I think [Zoltan] was working with BUTCHER BABIES, trying to help them to further their career a little bit, and was thinking that maybe they could do with another guitar player. So he contacted me via Instagram, and we got chatting for a bit. I think it was really only a couple of weeks later after that I ended up in Hollywood anyway, in L.A. And then I met the [BUTCHER BABIES] guys and stuff, and then we went in the studio. And at that point, Zoltan came out to the studio and we hung out and stuff like that. So that's pretty much how we met.

"I was about to embark on doing some bits and pieces with the BUTCHER BABIES, having done 'Dimebash', and that was kind of our first gig — 'here's our new bass player and new guitar player,' 'cause they got a new bass player at the same time as well," James added. "And then, right before going and actually doing a music video shoot for one of their songs, Zoltan contacted and was just, like, 'Yeah, we might need you to come out and finish up the rest of our tour, 'cause we've had a bit of a kind of issue with Jason Hook' — I think a health issue, stuff like that. So, yeah, 'stand by' kind of thing. And then literally the following day, there was like a fucking ticket waiting for me at LAX [Los Angeles International Airport]. So I was literally playing guitar in first class the whole flight back, because I was still learning the shit on the way to England — 17 songs, something like that. Obviously, I'd been a fan of the band, so I knew the music and everything, so it wasn't a case of having to learn the arrangements — assuming that none of the stuff had been changed that much for live, that part of it was kind of already in my head. But I had to just sit down and work out the physical aspect of doing some of their stuff."

Andy went on to say that he was pleased things worked out the way they did. "I'm happy that it happened, but, obviously, it's to the detriment of somebody else's life and career," he said, referring to Hook's dismissal from FIVE FINGER. "But I think things just naturally move on, and this is just one of those things."

James made his recording debut with FIVE FINGER on the song "Broken World", which is featured on the second installment of the band's greatest-hits collection, "A Decade Of Destruction - Volume 2".

FIVE FINGER DEATH PUNCH's latest album, "F8", was released in February 2020. The follow-up to 2018's "And Justice For None" capped a turbulent period for FIVE FINGER DEATH PUNCH in which singer Ivan Moody finally got sober after a near-fatal struggle with addiction, while co-founding drummer Jeremy Spencer bowed out of the band due to physical issues.