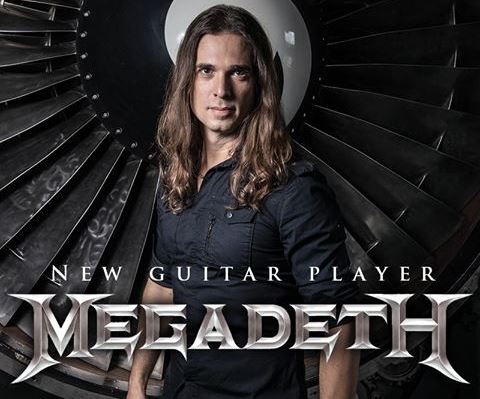 Brazilian metallers ANGRA have thrown their unwavering support behind their guitarist Kiko Loureiro, who has just been named the new axeman in MEGADETH.

"Kiko is in MEGADETH! Wow! What a feeling of pride!

"I have known Kiko for many years and he deserves this great opportunity more than anyone else.

"I usually say that we have a brotherhood's relationship, so we always wish the best for each other.

"Kiko has been tracking a very serious and talented career.

"I take to say this is also an amazing achievement for Brazilian metal.

"The beginning of this new epic stage is something we all should celebrate. It will be great for ANGRA and for all Brazilian bands, since it draws attention and highlights the talent of Brazilian musicians in general.

"Regarding the works with ANGRA, I believe he will comply with all activities that he has already committed to and he will always be part of our family. He will definitively not be able to turn his back for something he helped build with so much effort. I'm sure we will still make a lot together, either in or out of ANGRA.

"Brother, lots of luck and success to you! "

Adds ANGRA manager Paulo Baron: "We always work to be better than our own idols and so one day we reach the opportunity.

"Kiko worked hard for it and became a great Latin American pride so I think he deserves to be in this position now.

"I think ANGRA made the difference. Without it, perhaps he would not be chosen and it could be any other member of our group, because our band is great.

"If every American or English citizen had to go through what we have spent to build a career; from learning to speak a foreign language till buy a music instrument much more expensive than any American or British citizen would pay for it, we can already consider this a great victory to be highlighted.

"Kiko deserves it. He is a great example of nowadays professional musician and he is a successful example to be followed by many other Brazilian and Latin musicians who wish to achieve success in their life."

Says ANGRA bassist bassist Felipe Andreoli: "When I received the call from Kiko saying he was going to audition for MEGADETH, I was in awe! My friend and partner of 14 years joining a band that was part of my musical formation in a very intense way... It's not the kind of news that you get every day! Immediately my thought was, 'Wow, MEGADETH is in very good hands.'

"I really think that the extraordinary talent and the unique professionalism of Kiko Loureiro, with whom I have learned so much over the years, qualify him to enter any band in the world. Like ANGRA, now MEGADETH is lucky to have him. A world-class Brazilian talent.

"I am very proud of my friend and wish him nothing but the best!

"This is the beginning of an amazing journey where he walks with legends, a place he certainly deserves."