Eddie Van Halen Park and Edward Van Halen Memorial Park are among the names being considered for a new park which will soon be under construction in the legendary VAN HALEN guitarist's former hometown of Pasadena, California.

Now through Friday, September 24 at 4:00 p.m., Pasadena city officials are asking the community to review the all names that are being considered and vote for their preferred choice.

Votes will be tallied and presented to the Recreation and Parks Commission for discussion and, subsequently, a recommendation of the park's official name will be presented to City Council for its consideration.

Park naming criteria: Pasadena will adopt a name for the new park that meets at least one of the criteria established in the City's Public Park and Recreation Facility Naming Policy. The criteria are as follows:

* Geographical location of the park of facility;
* Natural or geological features proximate to the park or facility;
* Cultural or historical significance to the City or surrounding neighborhood;
* Name of an individual who has made a significant contribution to the community, country, state, or field of parks and recreation.

Last October, a City Council meeting was held in Pasadena where a memorial honoring Eddie was discussed.

The park in Pasadena's Playhouse District is pictured below in a rendering provided by city officials. 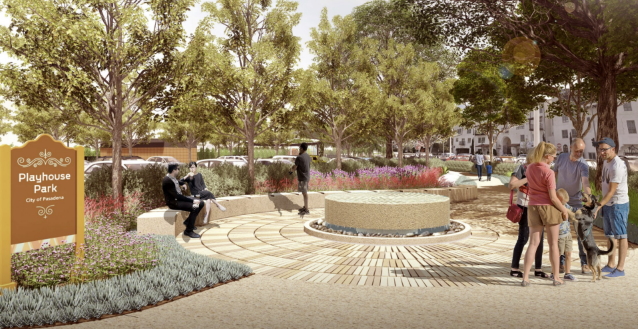