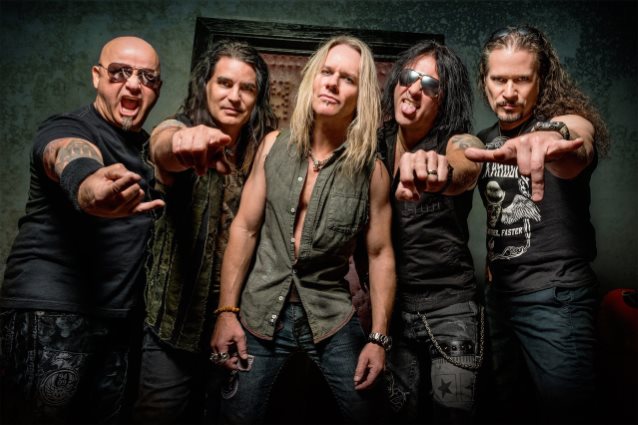 "Devil Dancer", a new song from WARRANT, can be streamed below. The track is taken from the band's new studio album, "Louder Harder Faster", which will be relased on May 12 via Frontiers Music Srl. The disc was recorded with producer Jeff Pilson, a veteran bassist who has played with DIO, FOREIGNER, DOKKEN and T&N, among others, and was mixed by Pat Regan except for the song "I Think I'll Just Stay Here And Drink", which was mixed by Chris "The Wizard" Collier (FLOTSAM AND JETSAM, PRONG, LAST IN LINE).

With a lineup featuring original members Erik Turner (guitar),Jerry Dixon (bass),Joey Allen (guitar) and Steven Sweet (drums) along with singer Robert Mason (LYNCH MOB, CRY OF LOVE),WARRANT is now stronger than ever. Mason's vocals remain a breath of fresh air and his swagger on the songs gives new life and a bright future to the band. "Louder Harder Faster", true to the band's roots, is full of rockers with some classic ballads thrown in and will surely send their faithful fans into a frenzy.

Turner says: "You can hear and feel the emotions of the last twenty-five-plus years of being in this band poured into 'Louder Harder Faster'. The fun and the frustrations, the pleasure and the pain... a whole lot of blood, sweat, tears and beers went into the making of this album. Love it or hate it, it's the real-fuckin'-deal, hundred-percent pure melodic hard rock handcrafted by five musicians who dedicated their lives to music when they were just little kids with big dreams."

Dixon adds: "'Louder Harder Faster' is truly one of our best records to date. It has all the classic WARRANT ingredients that people have come to know, plus a lot of extras that keep it in the modern realm of todays music. It's a perfect mix between balls and ballads.

"When we started this project over two years ago, we wanted to bring the listener back to the days of sitting in the living room and cranking up a record from start to finish.

"Making full records seems to be a lost art, [and] we hope in some small way that this album helps people find that art again."

Regarding how the "Louder Harder Faster" album title came about, Mason told "The Rock Brigade" podcast: "On stage, since probably '09, '10, '11… I don't remember when; maybe it was after our record [was released]. But as a thing to say between… It kind of just came out of my mouth one day — 'louder, harder, faster' — and I screamed it into the microphone and we started the next song. It was kind of one of those dumb things lead singers say to break up the dead air between songs in live shows. And it kind of stuck in my head and I started doing it. It was a thing I kind of started saying. And one day I had a riff in my hands and a guitar in my house, or in a hotel room, and then it turned into, 'Oh, guys, by the way, I wrote this song. It's called 'Louder, Harder, Faster'.' And I think I half-drunkenly said in a hotel bar one night, maybe three or four years ago, 'Oh, by the way, the record should be called 'Louder, Harder, Faster', 'cause I have this fucking song.' And, you know, that's what cocky lead singers say to their guitar players. And I think Joey Allen was, like, 'Yeah, yeah. Blah blah blah. I'll believe it when I hear it.' So there you go. When we came up with the songs for this record, it just kind of became obvious that that was the… If you're gonna name it after one of the songs, there you go."