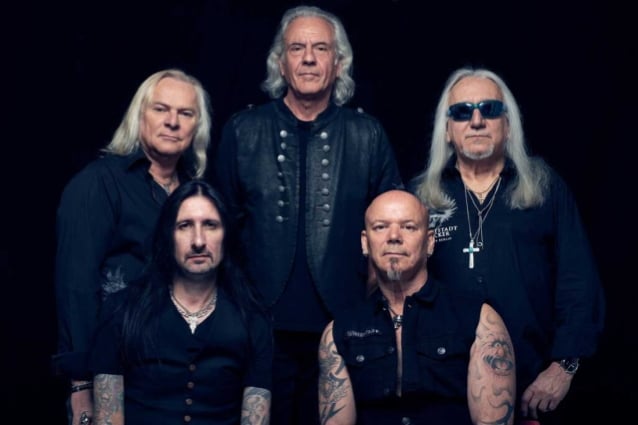 In a new interview with Danny Stoakes, URIAH HEEP guitarist Mick Box spoke about the progress of the recording sessions for the legendary progressive rockers' 26th album. "We've just finished recording it," he said. "We just okayed all the mixes from [producer] Jay Ruston. He did [2018's] 'Living The Dream'. He's been doing it. And he's out in L.A. so he's been sending the stuff. I just sent around a load of titles for everyone to pull one out of the bag… And then we've gotta do the artwork, of course. Once the title's been delivered, the artwork has gotta come with that, and then all the credits and everything else and lyrics and all that stuff. So that takes a bit of time. Plus with everything that's happened, and we will release it on vinyl, I think there's a seven-month run-up before you can get anything — simply because of the state that COVID has left the business in. The bottom line is once we've delivered all that, we give it to the record company and they are the people that really decide [when to put it out]. We have no input whatsoever. Because it's a business — they'll find the right time for them to benefit."

Asked if URIAH HEEP will play any new songs on tour even before the upcoming album is released, Box said: "We'd not be allowed to by the record company, as much as we would be tempted. In today's market, let's put it this way, if we play a [new] song on stage, before I've got the jeans off and showered and poured a drink, it's recorded and up on YouTube and Facebook and everything else… So it's highly unlikely — for those reasons. I mean, for us, we'd play them all. But sometimes your hands are tied for a reason. And the record company, they come in and allow us to go in and record and do that, so you have to play ball with them."

"Living The Dream" was released in September 2018 via Frontiers Music Srl. The LP was helmed by Ruston, who has previously worked with ANTHRAX, STONE SOUR and STEEL PANTHER, among others.

Box is the original guitarist and sole remaining founding member of URIAH HEEP. He, vocalist Bernie Shaw and keyboardist/vocalist Phil Lanzon have formed the nucleus of the band for more than 35 years and released 17 albums together.