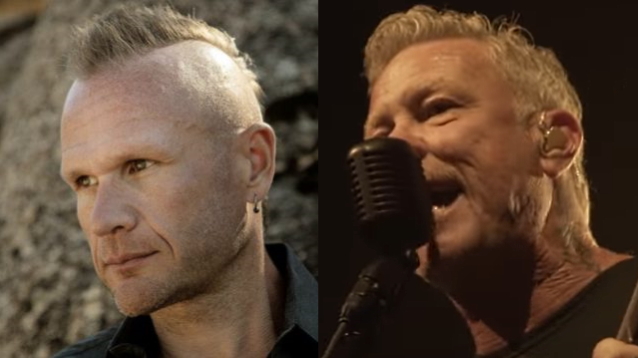 KILLSWITCH ENGAGE's ADAM DUTKIEWICZ: 'JAMES HETFIELD Pretty Much Shaped The Guitar Player That I Am'

In a recent interview with RadioactiveMike Z, host of the 96.7 KCAL-FM radio program "Wired In The Empire", KILLSWITCH ENGAGE guitarist Adam Dutkiewicz spoke about the influence of METALLICA on his musical upbringing. He said (as transcribed by BLABBERMOUTH.NET): "James Hetfield has pretty much shaped the guitar player that I am. I grew up on METALLICA, pretty much. Those riffs taught me how to play guitar.

Asked what his introduction to METALLICA was, Adam said: "It was a friend of mine at school. I'm a late bloomer, man. Right when '…And Justice For All' came out [in 1988], that's when I was, like, 'What the hell is this? This is so sick.' And then I kind of worked my way backwards. I feel like the entire catalog, from the 'Black Album' back, is just, like, a classic, man."

When RadioactiveMike Z pointed out that METALLICA's self-titled album just celebrated its 30th anniversary, Adam said: "Dude, we are old. Well, I don't know how old you are, but I am old. [Laughs] I remember when that record came out… I was a little upset at the lack of thrash — I'm not gonna lie — but there's still some killer songs on that record; there's some thrashier moments."

Adam previously discussed his love of METALLICA during a July 2021 appearance on MACHINE HEAD frontman Robb Flynn's "No Fuckin' Regrets With Robb Flynn" podcast. Asked to name the first METALLICA song he learned to play on guitar, Dutkiewicz said: "Hmmm… 'Justice' just came out. I remember hearing sonically that record for the first time being, like, 'Holy shit, that's so…' — technically, now, I can say 'scooped.' But I'm just, like, 'That's so fucking balls-tight and heavy. Oh my God.' It blew my mind. 'Cause, obviously, '[Master Of] Puppets' didn't sound that scooped. The kick drum on 'Justice' — tick, tick, tick. It's got more tick than a clock, man. So, yeah, I was, like, 'Holy crap. This is insanely sick.' So I think I started learning 'Blackened' and '…And Justice For All' and going through that record. I love the riffs."

He continued: "I know this is kind of strange to say, that could be my favorite METALLICA record, just because of the impact it had on my life at the time. I know it's a crazy thing to say… It doesn't get any better, dude. I love that shit. Right there, that's the soundtrack of me learning how to downpick… There's not a bad song on that record. [Out of all the METALLICA albums, it] means the most to me because of the way it shaped me."

KILLSWITCH ENGAGE's latest album, "Atonement", was released in August 2019 via Metal Blade Records in the U.S. and Sony Music Entertainment in the rest of the world. The disc features guest appearances by the band's former lead singer Howard Jones and TESTAMENT frontman Chuck Billy. It marks the band's third full-length release since the return of singer Jesse Leach, who rejoined the group in 2012.

In July 2021, Dutkiewicz and Leach released the second album from their TIMES OF GRACE project, "Songs Of Loss And Separation", via the band's own imprint label, Wicked Good Records, distributed by ADA Worldwide.