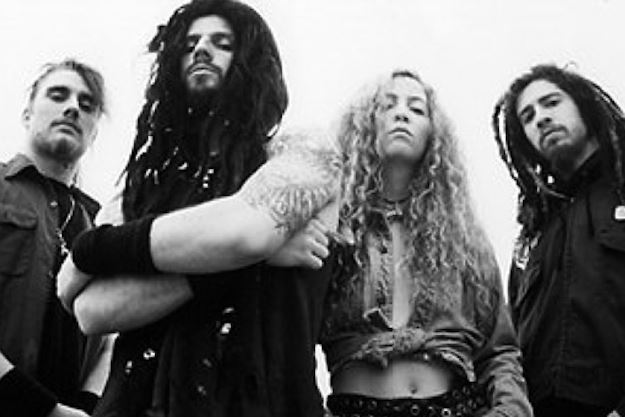 Regarding what fans can expect to see in the upcoming box set, Sean said: "There's, I think, fifty pages of liner notes. They've been interviewing us all for months and months. J. and I sent them all of our WHITE ZOMBIE ephemera — from t-shirts to old punk-rock flyers to everything — and they did a beautiful job on the booklet. It's gonna be a box set — all vinyl, all the early records that we started in 1985. And Rob and I had our own label. So all these things coming back out on vinyl. And some of the extra tracks that I didn't even remember. When we were in the studio, usually we used everything we recorded, but some of the things we had a couple of extra songs here and there. So there's gonna be a few surprises. I was surprised. And I was actually surprised how good these records sound, to be honest. That's a different-sounding band, 'cause we started off kind of punk and we went through different guitarists every three months. So it changed the sound, but you can really see the path of the band evolving."

He added, "Everybody likes to make up stories which aren't true. I don't think that's fair. Ivan left the band, John Tempesta came in and the band sounded better than ever, we kept playing and made bigger records and did more tours so I don't see how that had anything to do with it."

In the aforementioned Artisan News interview, Sean confirmed that Rob "hasn't spoken to any of [the other former members of WHITE ZOMBIE] since the band broke up."

WHITE ZOMBIE's 4-CD/1-DVD box set "Let Sleeping Corpses Lie" was released in November 2008 via Geffen/UMe. The CDs brought together for the first time all 64 original studio recordings released by the band led by Rob Zombie during its 1985-1996 career. The DVD offered nine music videos, 10 live performances, and some hidden gems.

Yuenger told Crawdaddy! about "Let Sleeping Corpses Lie": "They sent me and Sean mockups, like, two days before the release date. There was such little thought put into it. None of the photos were credited. There were no liner notes, which are essential for something like that. I mean, the band had such an interesting story, how could you not have liner notes? I hear about it all the time from fans. They're happy that the super rare early records are on there, that's cool for them to hear, but the packaging sucks. Sean's got all kinds cool shit — photos and flyers and stuff that they could have put in there."