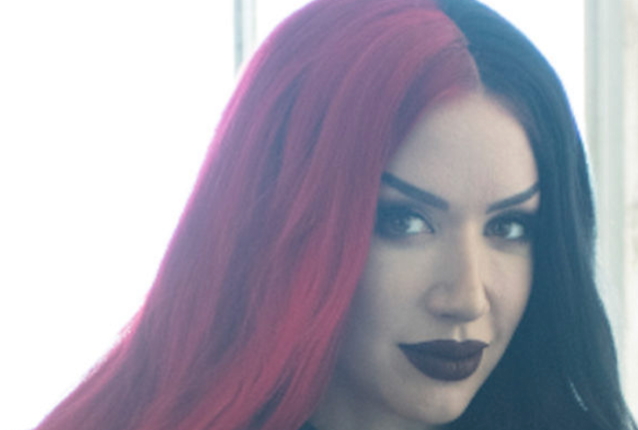 NEW YEARS DAY singer Ash Costello has entered the studio to begin work on the the follow-up to 2019's "Unbreakable" album.

Earlier today, Costello posted a photo of her and co-producer Scott Stevens (HALESTORM, SHINEDOWN) in the studio wearing masks, and she included the following message: "recording in 2020 DAY 1- I have so much to say and I've found my voice now more than ever. Back in @exiesscott studio (masks and shields of course) the man that helped create #Unbreakable along with @mitcheymitch .... I am so ready to create more magic. I'm not the person you think that I am. Leave some [love] if you're ready for new music"

Costello recently confirmed to U.K.'s Rock Sound that NEW YEARS DAY has been using the coronavirus downtime to start work on material for its new LP. Speaking about how the creative process is taking place, Ash said: "I actually just talked to one of my producers yesterday. So it really depends on the producer's comfort level. I've seen musicians online in the studio with a producer with a mask on or whatnot. But his studio is in his house, and his wife, she does not want musicians coming in and out. I totally respect it — I respect that completely; who knows where we've been? So it really depends on the producer. In this particular case, he can't have people over, so we thought we're gonna buy me some recording gear and he's gonna take over my screen and do, like, mirroring and do all of the engineering and I'll just have to sing… I was, like, 'I don't have to sit in L.A. traffic. Why haven't we always been doing this? It's way better.'"

According to Ash, she and her bandmates have discussed the possibility of composing new music over Zoom.

"When we're together, there's a vibe, and that's really what is driving the song forward," she said. "You have to be there, feeling it out and getting excited or seeing the vibe, like, 'Oh, maybe that wasn't a good idea.' You feel stuff. So it's definitely going to be different. It's going to be new — that's for sure."

Asked how she stays creative in a time like this, Ash said: "I can only speak personally for me, but I feel just as creative as I ever have. And what's nice is I just have a little bit more downtime to focus on it, so that's actually pretty helpful."

This past May, NEW YEARS DAY released the official music video for "Skeletons". The song is taken from "Unbreakable", which was released in April 2019 to critical acclaim. The band enlisted powerhouse producers Mitchell Marlow (ALL THAT REMAINS, IN THIS MOMENT) and Stevens to create an album that combines heavy rock with pop sensibilities.

This past January, NEW YEARS DAY released "Through The Years", a limited-edition box set featuring all seven of NEW YEARS DAY's albums on custom-colored vinyl, a Blu-ray of their beloved music videos and a four-page picture book of never-before-seen photos of Ash and NEW YEARS DAY from their humble beginnings. The photos were handpicked and the captions were hand written by Costello.