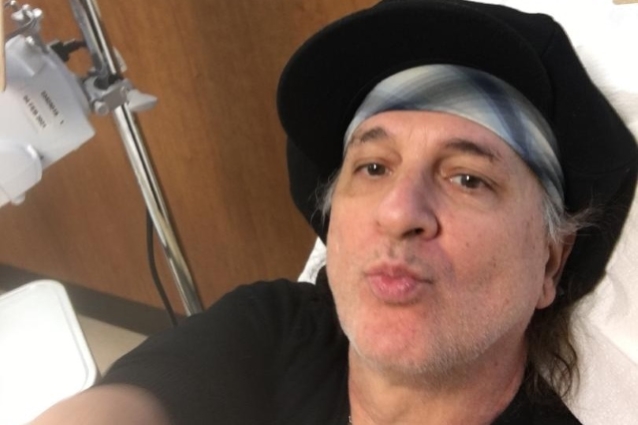 A fundraising campaign has been launched for Sylvain Mizrahi, known as Sylvain Sylvain, songwriter and founding member of the NEW YORK DOLLS, who was recently diagnosed with cancer. He has been undergoing treatment that appears to be moving along successfully, but has a long way to go. This fund will be of great assistance in getting him back on his feet.

In a message on the GoFundMe page, Sylvain wrote: "I know there has been some curiosity, speculation and, yes, rumor about why I haven't been rampaging songs on [Facebook] or, more importantly, out on tour promoting my book 'There's No Bones In Ice Cream' and playing in a town near YOU.

"First, the BAD news: For about a year now, I have been battling cancer.
Then the GOOD news: I have an upcoming surgery with a great doctor that may do the TRICK. There will, however, be a somewhat long recovery period (at least a year).

"I have not been able to work since last year and have more surgery scheduled.

"As hard as life has been to me these past two years, I want to live and I know with your love and support, I'll have the best chance that I could ever have."

The NEW YORK DOLLS were called many things — glam, proto-punk, hard rock — but are probably best understood as a "dirty rock and roll" band. Combining an aggressively androgynous style with street-smart New York attitude and campy humor, the NEW YORK DOLLS ushered in the era of CBGBs, heroin chic, loud guitars and referential lyrics which gave rise to Patti Smith, the RAMONES, TELEVISION and many more. Fans of the band range from GUNS N' ROSES to Morrissey, who organized the reformation of the band when he curated Meltdown festival in 2004.