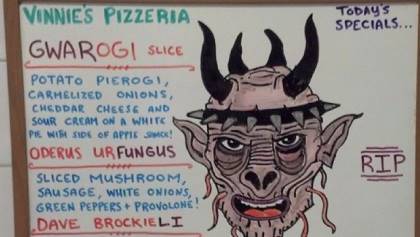 A Brooklyn, New York pizzeria has paid tribute to Dave Brockie by including on their menu board three specials in tribute to the late GWAR frontman.

Vinnie's Pizzeria has made three kinds of slices available: the Gwarogi, the Oderus UrFungus, and the Dave BrockieLi.