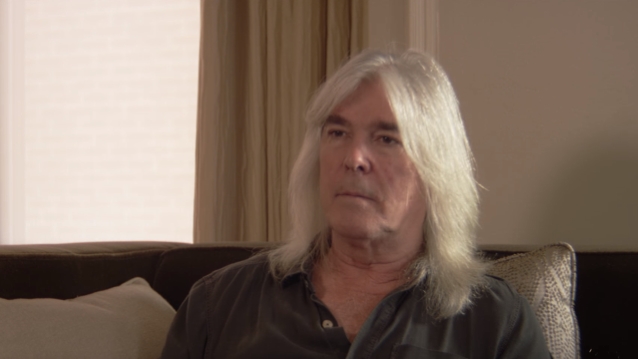 Photographic evidence has emerged suggesting that bassist Cliff Williams is part of the rumored AC/DC comeback album which is expected to be released in the coming months.

Last August, singer Brian Johnson and drummer Phil Rudd, along with guitarists Angus Young and Stevie Young, were photographed outside Vancouver's Warehouse Studios. Based on the pictures, the assumption at the time was that AC/DC was in the midst of making — or at least planning — another album, with Rudd and Johnson both back in the lineup.

Williams, who announced his retirement from AC/DC more than two years ago, wasn't seen in any of the images from the Warehouse, leading many fans to speculate that he was not involved in the band's latest recording sessions.

But a newly uncovered photo posted on the Instagram account of Canadian personal trainer Scott Frinskie places Williams and Johnson together at a Vancouver hotel while the studio sessions were taking place.

The picture, which can be seen below, appears to have been taken at the Shangri-La Hotel around the same time — September 2018 — that Johnson recorded a video message congratulating Canadian rockers HEADSTONES on the 25th anniversary of their critically acclaimed debut album, "Picture Of Health".

Posted by Headstones on Thursday, September 6, 2018