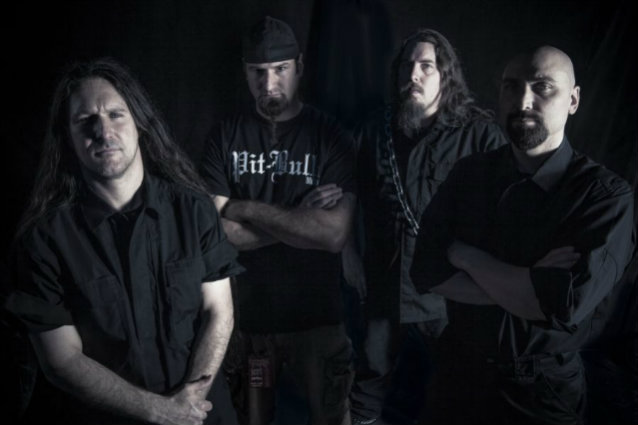 Next IMMOLATION Album Will Be 'Everything' Fans Would Expect

Australia's The Rockpit recently conducted an interview with bassist/vocalist Ross Dolan of New York death metal veterans IMMOLATION. A couple of excerpts from the chat follow below.

The Rockpit: So it's been a couple of years since your last release [2013's "Kingdom Of Conspiracy"]. Do you have any plans to release anything in the near future or are you happy to keep touring and taking it day by day?

Ross: Yeah, well, actually the new record is done; it will be out in January. We're actually going to play a new song when we come down and play the shows for you guys [in Australia]. So, yeah, we should be getting our eighth round of mixes today and we should be wrapped up today. So, yeah, like I said, January we've got eleven new songs so it should be a good one. I think everyone's going to dig this one. It should be dark and miserable [laughs] — everything you would expect from an IMMOLATION record.

The Rockpit: So without giving too much away, what was your inspiration for the new record?

Ross: I guess topically and lyrically, we touch on some of the same ideas that we touch on with the last couple of releases, so a lot of it deals with our world today, like some of our last releases we have some of our obligatory religious songs and some of the stuff we dealt with on "Majesty And Decay"and "Kingdom Of Conspiracy". It's definitely not a part 2, but like I said, topically and thematically, it's in the same ballpark. Inspiration just comes from life in general; everything inspires us today. You read the news, you have some good inspiration to build upon a lyrical idea or a song idea musically. It's definitely a strong one. I'd say the last couple of records have been pretty solid, writing-wise, so I think this one falls right in with those. Every song has its own thing going on. It has the elements that I think our fans really latch onto. The sick heavy dark parts, the fast intense stuff, the multi-layered parts, all the crazy guitar stuff that is layered on there so you know every song has that. We don't really have any songs that are too slow or too fast or heavy. It encompasses the whole spectrum.

The Rockpit: So given that you guys have been around since 1988 and yourselves and progenitors like SUFFOCATION have been around so long, what do you think keeps bands like yourself vibrant and excited besides passion and everything else. What keep you excited about modern metal as opposed to back in the day?

Ross: Well, I guess the essence of the music is still there. Obviously, metal has changed quite a bit since we started. I mean, from the way we acquire the music back then, it was completely different — no computers; there was no digital anything. It was all pretty much handwritten letters to bands to order their demos and you would wait for a response back, so you know we had to work a lot harder back then and to acquire bands that we found in fanzines from around the world. But that being said, it was also a much tighter network of bands and fans, so, you know, each band back then, let's say [in] the mid-to-late 80's, that started this scene kind of had its own identity, its own unique sound. I don't care who the band was, every band had its own thing going on, whether it was NIHILIST from Sweden or AUTOPSY from California or whoever it may be, but every band had its own thing going on, which was very cool back then. 28 years since we started, it's a lot more difficult to find that uniqueness that certain bands still have, that identity which is very important, but it's much harder when you have so many bands out there doing the same thing or pulling from different aspects of the extreme metal genre and incorporating that into one. But for us, I think we've always been passionate about the music. We enjoy the whole journey — the writing process, the recording process and especially the live aspect, because, to me, that is where any band shines, that's where you have that one hour to make your point. It's kind of sink or swim when we get up there. It's all a part of that journey and that interaction between us and the crowd and the energy. We still love it. We love creating dark haunting music that has something to say and is done in a way that our fans kind of appreciate the fact that we haven't strayed very far from that template that we laid out when we started back in '88. It's something that we never made a living off of; it hasn't been tainted, it hasn't become a job to us. It hasn't become, "Okay, let's write a record so we can generate some money." It's never been like that with us. That has kept us pretty well grounded — the fact that we have to balance our "normal lives" with what we do with IMMOLATION. It's still kept us hungry and very much in tune with what we want to do and what our fans want. It's all of that combined.