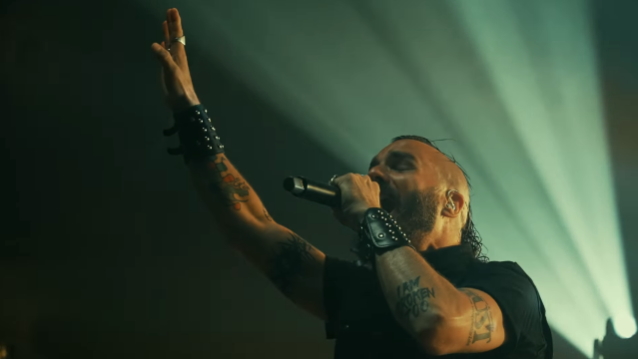 In a brand new interview with Australia's Heavy, KILLSWITH ENGAGE frontman Jesse Leach spoke about the band's plans for the coming months. He said (as transcribed by BLABBERMOUTH.NET): "Well, as of right now, I think the big thing that was looming over us was it's been a long time since we sat and wrote a record. So getting back on the road and touring — we did a tour with SLIPKNOT here in the States, and we did our own headlining tour with LIGHT THE TORCH and AUGUST BURNS RED — that sort of fulfilled, like, 'Oh, we're back. We're doing this again. We're playing shows. We're in front of an audience.' We weren't able to interact as much as we would have wanted to [because of the pandemic], but we were still doing it. But I think the conversation kept coming up of, like, 'What should we do?' Internationally traveling kind of fell to the wayside for not just the pandemic but the conflict in the Ukraine. So once all that touring went away overseas, we had a bunch of time. So we've started to work on demos on for a new record. And we just confirmed a tour here in the States with LAMB OF GOD and a plethora of other bands as support. So we'll be doing that in the fall. But predominantly between now and then, and then after then, we're really gonna be working on the record, trying to get that wrapped up and done quickly too, because we want it to be a record that's not gonna take a lot of time to create. We want that raw, fresh feeling, so a lot of these demos I'm trying to [get] through quickly just to get the energy and then we'll sort of dissect them as new get into the studio. So I think there's a real spirit within us to put out new material and then tour on that new record come next year, hopefully. So that's kind of what we're all thinking."

Elaborating on the time table for the completion of the next KILLSWITCH ENGAGE LP, Leach said: "We've got a couple of sessions [scheduled]. We haven't really put deadlines or anything. But I'm personally setting goals for me to create quick, very emotional, raw stuff for the demos and then probably taking a little more time, once we get to the studio, to polish that up and make it sound really good. Some of these demos I'm getting ready to send to the guys, if you would listen to them, most people would probably laugh 'cause they're just me going nuts, just trying to get the idea out quick and then we'll worry about re-recording it and polishing it and sort of making it sound KILLSWITCH-y.

"I've always been really hard on myself — a perfectionist, if you will — and I think it's hindered me in the demo-making process," he explained. "So my approach to this record is I wake up in the morning and I write lyrics out of the sleep. I listen to the music. It's moving very quickly for me, and it just feels fresh; it feels new. And then us getting into a room and jamming on that shit together, which we haven't done in years, that's the vibe we're going for. We kind of wanna bring that live feeling, that live sound to this next record… I want that energy to be there.

"Live music shouldn't be perfect," Leach added. "I don't like the studio fixes, I don't like the tuning — I hate all that shit. So the less that can happen, I'm into it. I'd rather keep it raw. It's rock and roll, man — it shouldn't be perfect. I think metal, over the years, has become very compressed and very manufactured. To me, I'm all about pushing away from that. So I think this next record will be a push-and-pull, 'cause [KILLSWITCH ENGAGE guitarist and producer] Adam [Dutkiewicz] is very much a perfectionist with the way he likes things to sound. So it should be interesting. He's on board of that too — sort of getting more of a live feel to what we're doing. I think it comes across. When you come see a band live like us, it is a little different than a record. But it should be."

As for the lyrical content of the next KILLSWITCH ENGAGE album, Jesse said: "I've purposefully been extremely spiritually minded and positive and trying to write uplifting things that are gonna help people process what we've been through.

"I think there's two ways you can go — you can get angry and write hyper-political stuff and anti-government or whatever, which I've done in the past, and I still stand by that, but I think, for me, where my gift lies, after what we've been through, is more of a comfort, more of an uplifting thing," he noted. "So I'm leaning hard on that — a little more existential, more looking forward, if you will, lyrically. It's probably gonna be some of the most positive stuff that I've ever written, and I'm doing that on purpose — for myself, but also for the listener. I think it's just time for us to put out a record that's just beaming with positivity and hope. And that's what I'm going to do."

KILLSWITCH ENGAGE's fourth album, "As Daylight Dies", released by Roadrunner Records on November 21, 2006, was recently certified platinum by the RIAA (Recording Industry Association of America). The record produced fan favorites such as "My Curse" and "The Arms Of Sorrow". The band also received a platinum certification for the single "My Curse", as well as gold certifications for 2004's "The End Of Heartache" and the "Set This World Ablaze" DVD. The single "The End Of Heartache" and KILLSWITCH ENGAGE's cover of DIO's "Holy Diver" are also certified gold.

KILLSWITCH ENGAGE's latest album, "Atonement", was released in August 2019 via Metal Blade Records in the U.S. and Sony Music Entertainment in the rest of the world. The disc featured guest appearances by former KILLSWITCH ENGAGE singer Howard Jones and TESTAMENT frontman Chuck Billy. It marked the band's third full-length release since the return of Leach, who rejoined the group in 2012.

In July 2021, Leach and Dutkiewicz released the second album from their TIMES OF GRACE project, "Songs Of Loss And Separation", via the band's own imprint label, Wicked Good Records, distributed by ADA Worldwide.

Listen to "The Time is Now with KILLSWITCH ENGAGE" on Spreaker.
Find more on Killswitch engage