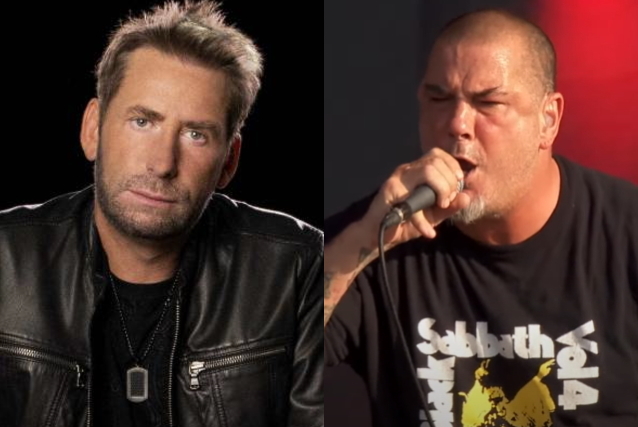 Kroeger discussed his views on the PANTERA comeback in an interview with LA Lloyd. He said (as transcribed by BLABBERMOUTH.NET): "Well, selfishly, I wanna see those songs performed live. When you listen to a PANTERA record and you think to yourself — well, as we thought for the last, I don't know how many years, since the band broke up — it's, like, 'Oh, I'm never gonna get to see these songs [performed] live again.' And it's heartbreaking. So the fact that the boys are getting called in from here and there… [I] love Zakk; [I] love Charlie — great, great guys. I think the fact that they're gonna get on stage and do this… All Phil has to do is just get up there and crush it.

"I would go see that," he continued. "I would buy a ticket to go see that show. I wanna see it. I wanna scream those songs. And I think that calling it more of a tribute is probably closer to what it's gonna be, which is great; that's great. People that love that music that wanna recreate it live every single night… And like I said, as long as Phil brings it, it's gonna be great. Just to be able to sit back and watch those guys to do it up… And I think all the PANTERA fans are gonna love it.

"Anybody who's sitting back hating on the idea, I think when it comes to town, they're gonna do the same thing that happens with those people that say they don't like NICKELBACK," Chad added. "They always find themselves at the show. Strangely enough — shocker! It's, like, 'Ah, I hate those guys. They suck.' 'Are you going?' 'Of course' [Laughs]"

Benante told "Trunk Nation With Eddie Trunk" about how he plans to approach the PANTERA gig: "I can't go do this as the drummer from ANTHRAX because it would be a different sound completely. So the way I'm gonna do that is if you close your eyes, it's gonna sound like it's Vinnie, basically. And that's how it's gonna be. The sound is gonna sound exactly like him."

In 2005, NICKELBACK recorded a song called "Side Of A Bullet", which was inspired by the death of Dimebag. Chad Kroeger first penned the song's aggressive, metallic riff, then wrote call-and-response lyrics from the perspective of a PANTERA fan so enraged over Dimebag's murder that he vows revenge, not realizing the shooter had already been killed by a policeman. "Side Of A Bullet" featured a previously unheard guitar solo from Darrell that was edited together from outtakes off various PANTERA albums. The song was written shortly after Dimebag was killed.

"I was very upset, and for two months, if I saw his picture somewhere I would get angry," Kroeger told MTV.com. "I hadn't lost somebody to a shooting before — it wasn't as though he'd been killed in some sort of accident. He was taken in such a horrible, malicious way that just made it more painful."

Once Kroeger finished demoing "Side Of A Bullet", he called up Vinnie Paul and played it to him to get his take on the tune. Paul liked what he heard and urged Kroeger to write lyrics about Dime. "I said, 'Well, funny enough, that song is about your brother,' " Kroeger recalled.

Vinnie Paul volunteered to play on the song, so Kroeger overnighted him the tape and encouraged him to record a new drum track over the one played by NICKELBACK drummer Daniel Adair. "He thought about it for a while," Kroeger said, "then he decided that Daniel had done such an amazing job that we should leave it the way it was. That's when he sent the guitar parts from 'Vulgar Display Of Power' and 'Far Beyond Driven', which we used for the solo."

Chad spoke to Launch about the first time he played the track for Vinnie Paul. "I called Vinnie, I wanted to get his blessing, and I play him the tune and I'm telling him that it's this very PANTERA-inspired riff," Chad said. "He was into it. He was digging it over the phone, and then he says, 'You know what, dude? You gotta write one for Dime.' And I said, 'Well, I wasn't quite sure how to lead into this, but that's what the song's about, and I kind of want to get your blessing on it.' And he's, like, 'Brother, of course you have my blessing.'"