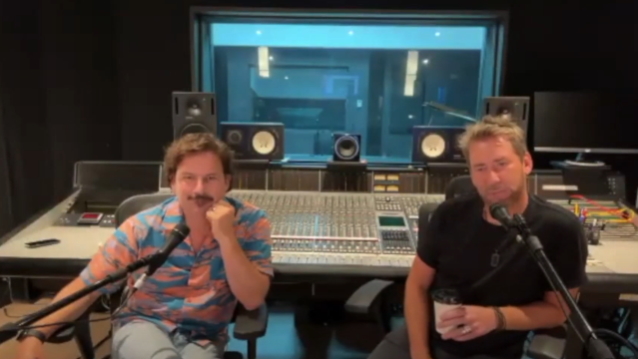 Guitarist Ryan Peake and guitarist/vocalist Chad Kroeger of Canadian rockers NICKELBACK spoke to Robyn Lane of the WRAT radio station about the band's upcoming tenth studio album, which is due in November. Regarding why it took so long to produce the follow-up to 2017's "Feed The Machine", Chad said (as transcribed by BLABBERMOUTH.NET): "Well, we should have been making a record a lot sooner, with all that time off [due to the coronavirus pandemic]. But it's weird to say this, but for 25 years it feels like someone's been standing behind us with a cattle prod and telling us, 'Hey, the record's gotta be done at this time. We're gonna tour at this time. We're gonna do Australia and then we're gonna go do Europe and then we're gonna come back. We'll go across Canada. We'll hit America.' Just like every other band that has to do this stuff, you wanna get a chance to see your fans all around the world. But with this, we were, like, 'We'll get to it when we get to it.' [Laughs] And yeah, we took our time with it, which was just a wonderful luxury, to be able to sit back and [go], 'No. I'm gonna play this guitar solo 40 more times for another three days and make sure it's just exactly how we want it as opposed to deadline, deadline, deadline."

In recent weeks, NICKELBACK has been teasing a new single, "San Quentin", which will arrive on September 7. Asked about some fans' initial reaction that the 10-second clip is trailering what sounds on initial listen like the heaviest song the band has ever written and unlike anything NICKELBACK has done before, Ryan said: "It's funny. We've been hearing that quite a bit. It's actually interesting because I think NICKELBACK fans would know for sure [that it's us once they heard the full song]. I don't think it's unusual… It's a heavy rock song, and if you've seen us live, you would definitely get it. But I kind of like that people are feeling like it's a surprise that we can have rock songs like that in the repertoire."

A music video for "San Quentin" was filmed on Tuesday (August 30) at the Simon Fraser University Convocation Mall in British Columbia. The clip will make its online debut by mid-September.

According to CTV News, hundreds of NICKELBACK fans attended the shoot, including one fan who one fan traveled all the way from Edmonton.

NICKELBACK will embark on a U.S. tour in support of its new album in the summer of 2023.

Peake said in April 2020 that NICKELBACK's documentary — which has been in the works for at least a few years — was "very close to being released."

In August 2020, NICKELBACK released a music video for its cover version of THE CHARLIE DANIELS BAND classic "The Devil Went Down To Georgia". Honoring Daniels, who passed away in July 2020, NICKELBACK invited guitarist Dave Martone to join them on a cover of the infamous classic story — paying homage to Daniels's influence on their careers and the legacy left behind.

NICKELBACK's "All The Right Reasons: 15th Anniversary Expanded Edition" was released as a two-CD set in October 2020. The collection featured a newly remastered version of the original 2005 album, a selection of B-sides and a 2006 live concert recording.

Since forming in Alberta, Canada in 1995, NICKELBACK has cemented itself as one of the most commercially viable and important acts of the past three decades. NICKELBACK's success includes worldwide sales of more than 50 million units, solidifying their status as one of the top-selling acts of all time.