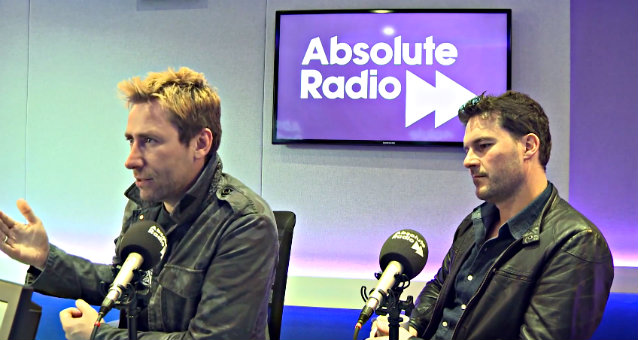 NICKELBACK's CHAD KROEGER: 'No One Can Make As Much Fun Of Us As We Make Fun Of Ourselves'

Guitarist Ryan Peake and guitarist/vocalist Chad Kroeger of Canadian rockers NICKELBACK were recently interviewed on UK's Absolute Radio. You can now watch the chat below.

"We are one of those bands that a lot of people think take themselves seriously," said Chad. "And no one — no one, and I know this is hard to believe — can make as much fun of us as we make fun of ourselves. And we are harsh. If you think the Internet's rough, you should sit in a van with us. We are really harsh. We make up the best alternate lines to our own songs. And this is some top-shelf stuff."

The eighth studio album from NICKELBACK, titled "No Fixed Address", is likely to sell between 60,000 and 65,000 copies in the U.S. in its first week on sale, according to The Pulse of Radio. The group's previous effort, 2011's "Here And Now", moved 226,714 copies in its first week — making the drop for "No Fixed Address" an alarming one even given the continuing decline of album sales overall.

The album's first rock single, "Edge Of A Revolution", is sliding down the rock chart at No. 16 after a quick climb and brief stay at No. 1.

The 11-song set is the first through the group's new deal with Republic Records.

NICKELBACK will launch a six-month North American tour on February 14, 2015 in Allentown, Pennsylvania.