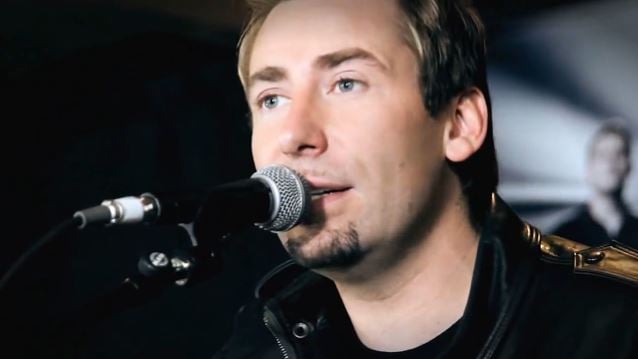 NICKELBACK's CHAD KROEGER On Campaign To Ban Band From London: 'I Love It'

A British man named Craig Mandell recently launched a crowdfunding campaign to have NICKELBACK banned from playing in London, explaining, "With your help, we can ensure that the band do not schedule any gigs here, do not attempt to come here — nor even phone here." The Pulse Of Radio asked NICKELBACK frontman Chad Kroeger how he felt about Mandell's initiative. "I love it," he said. "I hope the money goes to charity and not in this guy's pocket. More controversy that surrounds either myself, my personal life, the band, whatever — I think it's hilarious.

"All these critics, they're just tireless. They keep ragging on the band. If they had stopped writing all this stuff about us, there would be no controversy left in the band and we probably would have died out years ago. They don't know that they're still responsible for us being [laughs] around today."

Mandell was hoping to raise $1,000 for his effort to keep the Canadian rock act out of the English capital for the foreseeable future. At press time, he had raised $266 from 51 backers, with 24 days left to go.

Those who participate in Mandell's scheme will have an email sent on their behalf to NICKELBACK's management. The harshness of the message depends on how much money is contributed.

Kroeger's personal life did make headlines recently when it was reported that his year-old marriage to singer Avril Lavigne was on the rocks. Kroeger has not commented officially on the rumors.