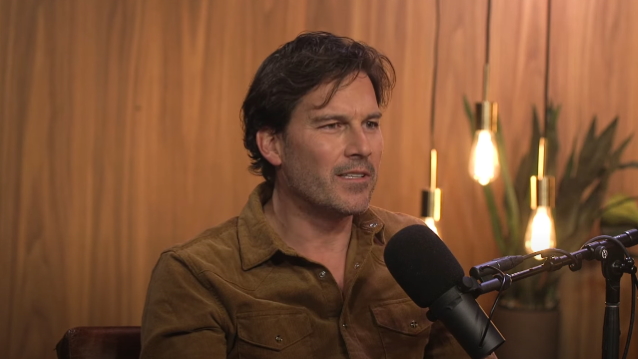 NICKELBACK's RYAN PEAKE: Metalheads Are 'Really Protective Of Their Genre'

In a new interview with Tom Power, host of "Q" on Canada's CBC Radio One, NICKELBACK guitarist Ryan Peake talked about the metal overtones in the band's music, particularly in the initial teaser that was released for the group's latest album, "Get Rollin'", which some fans thought featured a more "metalcore" sound than was the case with NICKELBACK's previous outings. He said (as transcribed by BLABBERMOUTH.NET): "Speaking as a metal listener…. I grew up listening to metal… I grew up initially with pop, but then, when I started playing guitar, it was metal — ANTHRAX and TESTAMENT… I loved metal growing up… But what I just find interesting — and this is more of an observation — is if you say [about a NICKELBACK song], 'Okay, this sounds a bit metal,' I can just hear all the metalheads just [getting all worked up about it]: 'Are you kidding me? Are you kidding me?' Because I come from that initially, and I understand there's some kind of protective nature in the metal audience. And it's weird, because if you play a rock song — like a really heavy rock song — to an audience that likes the more melodic stuff, they're kind of taken aback, maybe not expecting it, but they'll still — live especially — they'll get it and they'll be accepting, or they'll just go, 'Oh. Maybe not for me.' Metalheads? They'll be just, like, 'They're not metal,' and they'll just drag you through the mud for even suggesting that. It's really interesting. They're really protective of their genre. And if you dip your toe in there without fully being metal, you're just gonna get tore up."

Earlier in the month, Peake spoke to RockSverige about NICKELBACK bassist Mike Kroeger's comment about three years ago that he wanted to make a SLAYER covers album. Asked if that is something all four members of NICKELBACK could agree on doing and whether it's even a possibility for NICKELBACK to make a record like that, Ryan laughed and said: "I don't know if it would be something we all could agree on because we are all have our different likes and dislikes when it comes to music. Mike's is really heavy, and I like SLAYER, so I get that. I think we could probably agree on doing a heavy covers album or something like that."

He continued: "I got kicked out of Ryan Vikedal's [former NICKELBACK drummer] garage for playing [SLAYER's] 'South Of Heaven'. I went down to see him before he was actually in the band and I was just kind of jamming with him. We grew up with that."

Circling back to the idea of NICKELBACK making a SLAYER covers album, Ryan said: "I don't know. This is what I like about this band. I don't think anything's going to be so crazy to hear from us. I think if a metal band went and made a full-on country album, it might be, like, 'What are you doing? You've got nine metal albums, and now this?'

"We've kind of dipped our toes in a lot of different music, I feel, and especially with 'No Fixed Address', where we kind of tried to stretch our legs a bit, that it's maybe believable.

"I love metal stuff, I love pop stuff, I love some country, for sure. Chris Stapleton is unreal. He is singlehandedly saving country music. I grew up with country music, but I haven't been listening to it in years until I heard him do something with an acoustic and another guy with an upright bass and his wife singing harmony. That was it. I had goosebumps like crazy, and I love when music does that. And it doesn't matter where it comes from.

"Maybe [we can] do a TESTAMENT, SLAYER, MESHUGGAH album? I don't know. [Laughs]"

In January 2019, Mike told Australia's Wall Of Sound that metal is "what I listen to without fail," adding that "if we could actually sink in and do a metal album, all four of us would love it. I know that we're all — on differing scales — metalheads at our core. We all know everything about the 'Big Four' — METALLICA, MEGADETH, ANTHRAX and SLAYER. I would do a SLAYER cover album if I could. That's where my heart lies. There are just never enough hours in the day to do everything, but let's just say I wouldn't count it out."

But six months later, Kroeger offered a different take on the possibility of recording a SLAYER covers album, telling the New Hampshire Union Leader that he never said NICKELBACK as a band would partake in such a project.

"As a journalist yourself, you realize the importance of context and how context can be manipulated," Mike said. "I can't remember who I was talking to, but I know this got somewhat distorted, and then it was put on a wire and then everybody got it.

"I said this in an interview with somebody in, I think, Australia, and then it got regurgitated and switched around and then reformatted it into this clickbait form," he continued. "What I said was, 'I would like to make a SLAYER cover record or have a SLAYER cover band or make a metal album.' I didn't say [it involved] NICKELBACK … Like, 'Hey, everybody, be outraged because NICKELBACK wants to make a heavy metal album.'"

According to Mike, he still has a passion for the heavier forms of music and he often entertains the idea of dabbling in the more extreme styles than NICKELBACK is known for.

"I'm a metalhead, love metal music, love SLAYER in particular; they're one of my favorites," he said. "And I would love to play that music, but I couldn't speak for NICKELBACK in saying that we want to do a SLAYER cover band or make a death-metal record.

"I know that the drummer, Daniel [Adair], he's a big fan of metal. I don't know if he wants to be in a metal band. He might. I know Chad [Kroeger, guitar/vocals] and Ryan both like heavy metal, but I don't know if they wanna make a record of it or play in a band that plays SLAYER covers. I sincerely doubt it."

Asked if SLAYER was the first metal band he really got into, Mike said: "I remember particular moments in my life when I heard a kind of music or a band for the first time, and I remember exactly where I was and what I was doing. SLAYER's one of those. I was skateboarding with friends and we had a little boombox with us. And I remember one of the guys put on a cassette tape … [I] put on a cassette tape of the 'Reign In Blood' album. I just sat down and I was' like, 'What on earth is that? What, what is this? I need to know what this is.' And it just got me. That's one in particular that I remember distinctly socking me right between the eyes."