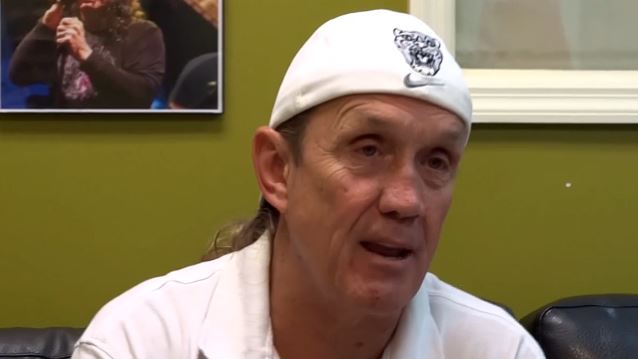 NICKO MCBRAIN Wants IRON MAIDEN To Perform With An Orchestra

On Thursday, October 15, IRON MAIDEN drummer Nicko McBrain was interviewed by Andy Preston of the 98.7 The Gater radio station in West Palm Beach, Florida. You can now watch the chat below. A couple of excerpts follow (transcribed by BLABBERMOUTH.NET).

On IRON MAIDEN's new album, "The Book Of Souls":

"People paraphrase it and go, 'Oh, Nicko always says it's the best album he's ever made. But this is definitely, without a doubt, hands down, the best record we've ever made."

On whether IRON MAIDEN's "The Book Of Souls" tour will see the band performing "Empire Of The Clouds", the 18-minute track penned by singer Bruce Dickinson:

"I'm pretty sure we won't do it. Primarily… Not because of the length of the song… There's a lot of orchestration, and Bruce's piano playing… [inhales deeply] Let's say it's not really ready to be played live. The thing is, what I'd like to see MAIDEN do before we step back from the touring schedule that we usually do, I'd like to see us do like what Jon Lord [DEEP PURPLE] did years and years back with the London [Symphony Orchestra], when he played the [Royal] Albert Hall, is do IRON MAIDEN songs with an orchestra. I'd love [to do it], because there's a lot of stuff there. 'Alexander The Great' is a track that everybody's been moaning [that] it's been never played live. I'd like to do things like that. Everything that we haven't covered I'd like to see us do an orchestral version of. Perhaps that will happen one day. I think ['Empire Of The Clouds'] will probably be performed somewhere along the line, whether it's in an IRON MAIDEN formula, or whether it'll be Bruce doing something with that song with someone else, perhaps. But I don't think we can really see play that one live, 'cause there's so much going on. Michael Kenney [who has been playing keyboards on MAIDEN's records and world tours] does a lot of the fill-ins on songs where we've had… There's something probably on 'The Red And The Black', if we do that live, Michael would do that, or if we did something which has got some orchestration on it, which you can do with a keyboard, Michael Kenney would do it. But this you can't do; you can't do that. Plus there's a lot of percussion instruments on there as well and whatnot, so it really wouldn't be something… And it's eighteen minutes long. I mean, you could do two songs in there [instead of 'Empire Of The Clouds'], couldn't you?"

MAIDEN's sixteenth — and first-ever double — studio album, "The Book Of Souls", was released worldwide on September 4 through Parlophone Records (BMG in the U.S.A). The CD was recorded in Paris, France with producer Kevin "Caveman" Shirley in late 2014, with the finishing touches added earlier this year.